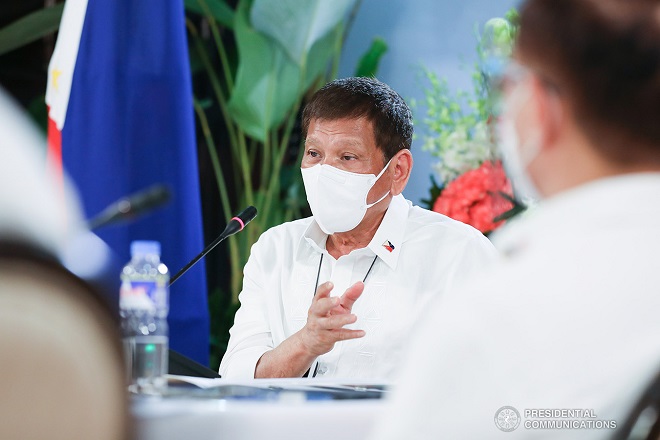 President Rodrigo Duterte is willing to receive the first shot of coronavirus vaccine just to encourage the public to have themselves inoculated too, Malacanang said on Monday.

This as a vaccine expert said so far, any of the three possible safest vaccines for Duterte are those produced by Western countries.

"If he (Duterte) sees that the people are afraid of the vaccine, he will not hesitate to get the first (vaccine). For him, it's the interest first of the public before the interest of the leaders," Presidential Spokesperson Harry Roque said in a television interview.

In his public address last week, Duterte said he wanted the vulnerable and poor Filipinos to receive the COVID-19 vaccine first. He and other Cabinet officials could be the last to be inoculated. He made the statement amid hesitation of many Filipinos to be vaccinated.

Meanwhile, in a televised press briefing, Rontgene Solante of state-run San Lazaro Hospital, said COVID-19 vaccines manufactured by America's Pfizer and Moderna, and United Kingdom's AstraZeneca could be considered the safest and could be used to the President.

"For now, what we've seen, what we're checking first is the safety of the vaccine and I think so far, among the three, although Pfizer has been given the EUA (emergency use authorization), but for most of these vaccines, they cannot really proceed to phase 3 unless they are safe. So, I think most of the vaccines now are really safe," he said when asked of the vaccine, which he would recommend for Duterte.

"Most of these vaccines are safe to be given and effective regardless of age and regardless of presence of comorbidities," said Solante, who is a member of the government's vaccine expert panel.

Asked why China's Sinovac was not included, he said, "We haven't reviewed yet Sinovac."

The Philippine Food and Drug Administration has so far only granted EUA to Pfizer. Other pharmaceutical companies have not yet applied nor granted the EUA.

But the Duterte administration has secured 25 million doses of vaccine from Sinovac and the initial 50,000 doses are expected to be delivered next month.

Some private companies and local government units, on the other hand, through the national government, have signed tripartite agreement for 17 million doses from AstraZeneca. Celerina Monte/DMS