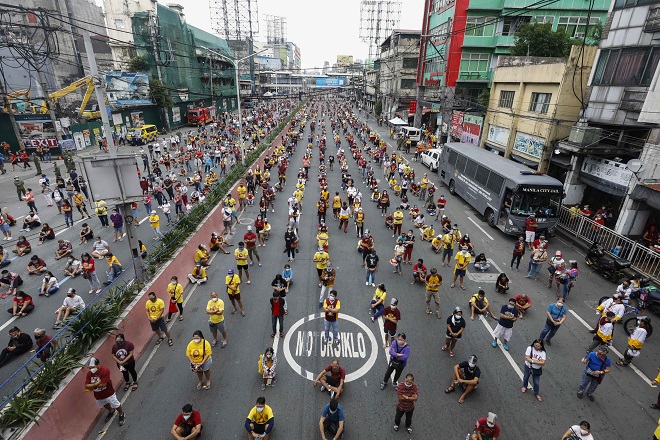 The chief of the Manila Police District (MPD) on Sunday said the celebration of the Feast of the Black Nazarene was generally peaceful with around 500,000 attendees and no untoward incidents were reported.

“We are grateful to inform the people that the celebration was peaceful and no untoward incidents, no crimes were reported,” Brig. Gen. Leo Francisco said in a radio interview.

“We did not have any clashes with the devotees or anything that we can say misunderstandings… That’s why we thanked the devotees… Our estimate is about close to half a million (devotees attended the feast),” he said.

Francisco said a short fire incident in Manila City Jail was the reason why the devotees all of a sudden flocked in the barricades set along control points.

“But after the incident, the police fixed the line again… It was only natural that a lot were shocked when the fire happened because it was not included in our plan,” he said.

He said all throughout the celebration, they were able to implement the minimum health protocols.

“There were just times when the policemen were not able to notice that some were already beyond the required physical distance because the stretch of Quezon Boulevard, Palanca Street, Recto Avenue and Rizal Avenue is long,” Francisco said.

Due to COVID-19 pandemic, the Church officials decided to cancel this year's traditional ‘Traslacion’ or procession of the image of the Black Nazarene and decided to do a localized version where there were simultaneous masses in churches around Manila.

Meanwhile, Fr. Douglas Badong, parochial vicar of Quiapo Church, said the devotees showed discipline and followed all the protocols set for the celebration.

“My overall assessment is I’m so glad to see the devotees following (health protocols) and disciplined, they were really patient just to be able to go to church and see the Black Nazarene,” he said.

He added that the Hijos del Nazareno, barangay officials, and police worked hard in assuring the safety of the devotees.

The church official assured that the 30 percent capacity of the church was strictly followed.

Some of the devotees also chose to attend online masses.

The Department of Health (DOH) reminded all the attendees to observe and immediately undergo quarantine if they feel any symptoms related to COVID-19 infection. Ella Dionisio/DMS