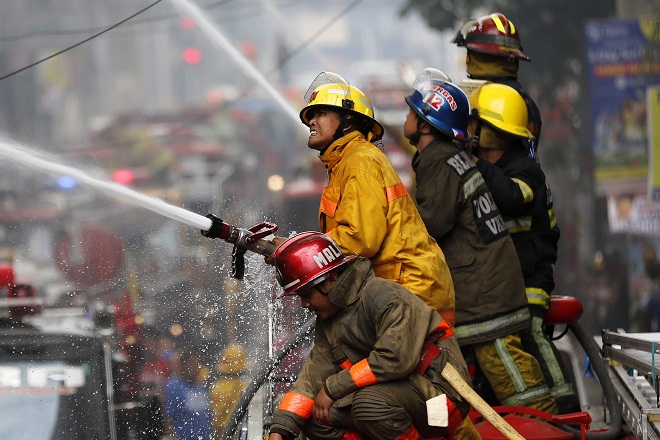 Hundreds of families were affected after a fire razed houses in Tondo on Saturday morning, with the Philippine Air Force sending a helicopter to help douse the blaze.

According to the public information office of the Manila City Hall the fire struck  at the vicinity of Brgy. 105, Zone 8, Happy Land in Tondo.

"Around 300 houses and more or less 450 families were affected by the fire incident," the Manila City PIO said in a Facebook post.

In its initial report, the Manila Police District said the fire broke out around 7:31 am and reached the highest alarm of Task Force Bravo before it was declared fire out at 9:41 am.

MPD said some residents who were not affected by the fire started to return to their homes. Some victims are waiting for further instruction inside a covered court in the village, police added.

Major Aristides Galang, Philippine Air Force (PAF) spokesman, said "due to the limited access of the fire responders in the slum areas and in coordination with the Manila City Disaster Risk Reduction and Management Office, the Philippine Air Force quickly responded by sending out its Bell 205-A #312 of the 505th Search and Rescue Group (SRG) under Air Mobility Command."

"Given the short notice, 505th SRG pilots and crew took off at Colonel Jesus Villamor Air Base and performed three sorties of heli-bucket operations over the affected area,'' he said. Robina Asido/DMS