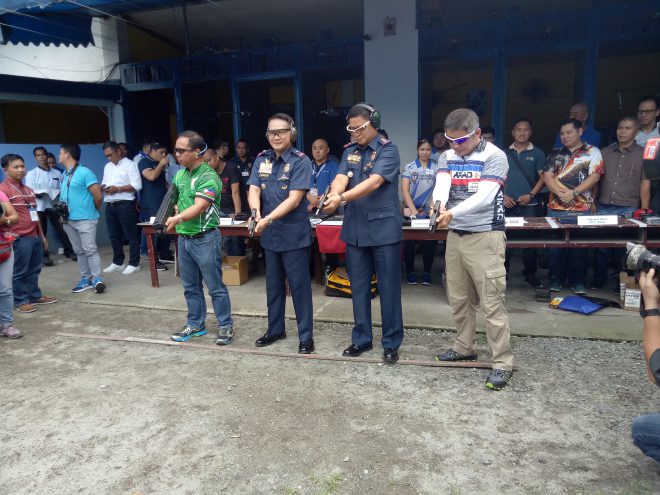 The Association of Firearms and Ammunition Dealers of the Philippines, Inc. (AFAD)  demonstrated Thursday the latest weaponry and firearms technology in the Media Industry Day at the Philippine National Police (PNP) in Camp Crame. "This activity will hopefully convey to the public -thru media- on how firearms sector has made giant strides during the past decades, making Philippines at par with some advanced countries in relation to gun manufacturing and distribution", Jethro Dionisio, AFAD president, said in a press statement. At least eight firearms manufacturer participated. The Stronghand Inc. presented HS 9mm service model and watertight Ammo while the Trust Trade showed Glock 19 and Tauru PT92 pistols. The Tactical Corner Inc. showed SAS 9mm, Ruger American Pistol 9mm, and Sm9th and Wesson M&P9c 9mm. A Girsan MC28SA by P.B. Dionisio and FNH FNX 45 Tactical from Defensive Armament Resource Corp. Tara TM 9 and UTAS 12 gauge shotgun was presented by Jethro International Inc and the Topspot Guns Int'l. Corp showed colt competition pistol 9mm. The Tactics SOG presented Tactical Ballistic Vests. "Some of the AFAD members are the source of high quality firearms and ammunition for the Armed Forces of the Philippines and the Philippine National Police", AFAD  said in the press kit. Local gun manufacturers in the Philippines export firearms to other countries were it is legal to own a gun, it said. The members of the media were given a chance to try and fire the guns exhibited by the AFAD after the live fire demonstration of Chief Superintendent Dionardo Carlos, the PNP spokesman, and Senior Superintendent Valeriano De Leon, acting chief of the Firearms and Explosives Division. "This is the first time we did this we call it The Media Day in preparation of upcoming gun show on July 13 to 17 in Mega trade hall . This will be the chance for other dealers to show their firearms that they would be displaying at the gun show", Dionisio said. (Alanna Ambi/DMS)