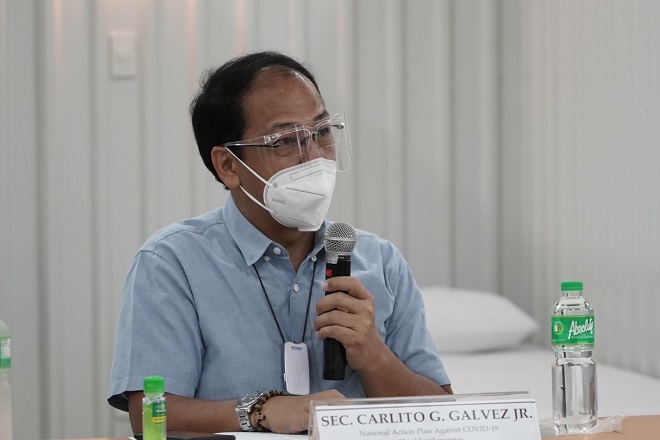 The Philippine government is eyeing to vaccinate against coronavirus disease up to 70 million Filipinos this year, an official said on Wednesday.

National Task Force Against COVID-19 Chief implementer Carlito Galvez Jr. said that the government is negotiating with about seven manufacturers to purchase at least 148 million doses.

"However, it will be dependent on the global supply. As we can see, countries have already procured. Those rich countries have already procured more than 80 percent of the global supply. Under the Philippine National Vaccine Roadmap, we're going to inject more or lead 50 to 70 million Filipinos within this year," he said in the "Laging Handa" press briefing.

He said the Duterte administration is now on the "advanced stages" of negotiations for the vaccines with Novavax, AstraZenica, Pfizer, Johnson & Johnson, Sinovac, and Gamaleya.

"We hope to close the deal with these companies this month," he said.

Aside from the bilateral negotiation, Galvez said the Philippines also stands to receive fully subsidized doses for the 20 percent or about 23 million Filipinos through the COVAX Facility, a global initiative which aims at working with vaccine manufacturers to provide countries worldwide with equitable access to safe and effective vaccines.

However, Galvez said as of January 6, only Pfizer BioNTech has applied for the emergency use authorization with the Philippine Food and Drug Administration.

He said he expects that other pharmaceutical companies would also apply for EAU with the FDA.

Meanwhile, on reports that a passenger from Manila who arrived in Hong Kong tested positive for new variant of COVID-19, Galvez said the government has been implementing measures to prevent the entry or spread of the new strain in the country.

"I can assure the Filipinos that we are prepared," he said, adding that Interior Secretary Eduardo Ano has given warnings to the mayors and governors to monitor the situation.

Bases Conversion and Development Authority head Vivencio Dizon, also the testing czar, quoting the Department of Health, said out of the more than 300 individuals from various countries who underwent COVID-19 tests, no one so far was found to be infected with new variant.

"As of now, no one from the Filipinos and foreigners who arrived here was found to be infected with COVID variant from UK," he said.

The Philippines has been implementing travel restrictions to travelers from 21 countries or territories with reported new variant of COVID-19.

In the same briefing, Galvez said President Rodrigo Duterte has approved the tripartite agreement between the national government, the local government units, and the vaccine company for the purchase of COVID-19 vaccines.

Several LGUs, particularly in Metro Manila, have vowed to buy their own vaccines.

Currently, any purchase of the vaccines should be done through government-to-government scheme. Celerina Monte/DMS