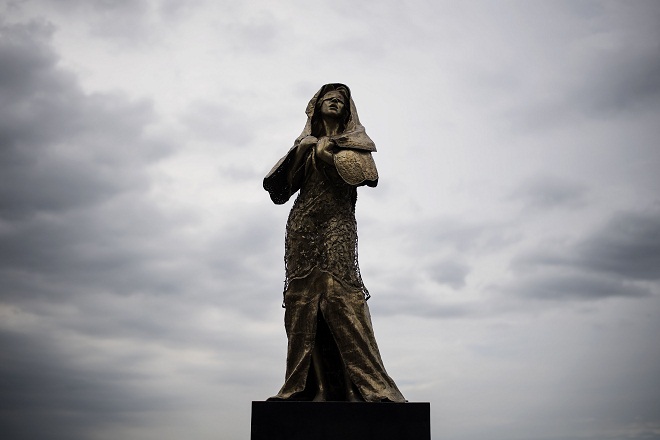 A civic group has expressed hope to put up once more a "comfort woman" statue, which was removed in Manila following apparent pressure from the Japanese government, by April this year in time for the 76th anniversary of the end of World War II.

In the "Tapatan" virtual forum, Teresita Ang-See, founder of the Movement for the Restoration of Peace and Order and convener of the Flowers4Lola, said her group may also pursue a criminal case against sculptor Jonas Roces if he continuously refuses to turn over the "Lola" statue to them.

"The case has been readied since last year," she said, adding that they did not file it yet because their group pitied Roces as he could also be a "victim" by those who were trying to pressure him and due to coronavirus pandemic also.

"We will contact the artist one last time, give him one last chance...to let us know where the statue is," Ang-See said.

The statue depicting the so-called comfort woman or Japanese sex slave during World War II was first erected along Roxas Boulevard in December 2017.

President Rodrigo Duterte initially defended the construction of the statue, saying it was part of the free expression.

But apparently, due to Japanese government's pressure, the Philippine government allowed the removal of the monument in April last year despite the opposition from some quarters, including Ang-See's group, which tapped Roces to create the bronze statue.

In August 2019, Ang-See's group was supposed to re-unveil the "Lola" statue, along with "Flowers for Lolas" marker, at the National Shrine of Our Mother of Perpetual Help in Baclaran, Paranaque City.

But Roces, who kept the statue for restoration after some parts were broken when it was removed by a government agency in Roxas Boulevard, refused to talk to Ang-See's group and later told the latter that the sculpture was stolen.

Ang-See expressed doubt that the statue was stolen since Roces allegedly failed to produce any police or barangay report regarding the incident.

"That (statue) was already paid. It doesn't belong to him. He (Roces) said that unknown people took it away. That's impossible. That (statue) is very heavy. We had to hire a forklift (truck) to transport it," Ang-See said.

She said if Roces would not turn over the image to them, they would raise funds again to come up with a new one.

The Filipino-Chinese civic leader said they would erect the statue at the National Shrine of Our Mother of Perpetual Help in Baclaran.

"We will place it there for the meantime until the government agrees to put it in a public place. We hope that one day, a (Philippine) leader will agree to have a memorial of a comfort woman here," she said.

She recalled three former Filipino comfort women died last year and a "handful", ages 89 to 96 years old, are still alive and they were hoping that a memorial could be erected.

"By April when we commemorate the end of World War II, hopefully we can install that statue," Ang-See said.

She said the Philippines so far remains the only country in the world that "succumbed to Japanese pressure."

"We are the only one, we stand on record, as the only country that knelt to the Japanese, we removed the statue," she lamented. Celerina Monte/DMS