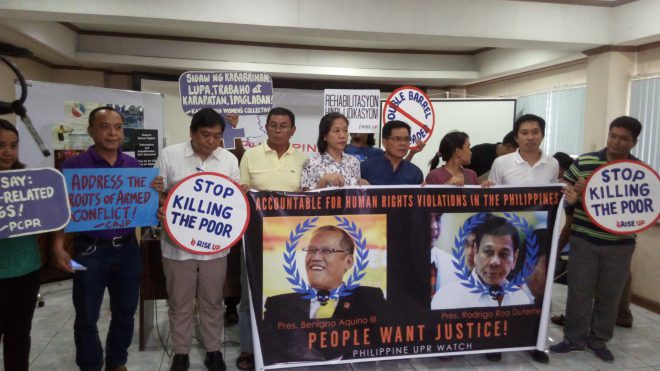 A group of  Philippine human rights activists will present records of violations during the Aquino and Duterte administrations for the third cycle of United Nations’ Human Rights Council Universal Periodic Review on May 8 in Geneva, Switzerland. Rex Reyes of the National Council of Churches in the Philippines said during Aquino administration from 2012 to 2016, there were 249 extra-judicial killings, 501 frustrated judicial killings, 17 enforced disappearance, 144 torture cases, 8 rape cases, 891 illegal arrests and 191,029 threats, harassments and intimidation cases documented by rights group Karapatan. He said in Duterte administration there are 47 listed cases of extrajudicial killings and more than 1,000 were killed in his war against drugs. According to Pya Macli-ing Malayao of Katribu, four indigenous people were killed by Armed Forces of the Philippines after President Rodrigo Duterte declared  all-out war against New Peoples Army. She claimed 2,382 indigenous people were forced to leave their communities because of  military operations. She added no justice had been achieved for 104 victims of extra judicial killings by state forces during the Aquino regime. Sharon Cabusao-Silva of Gabriela said women’s human rights continue to be violated in Aquino and Duterte administration in a press briefing. Jigs Clamor, deputy secretary-general of Karapatan, said violation of people’s rights targeting farmers and indigenous peoples, bombing of communities and harassment of activists indicate the need for reforms. According to Rey Cortez of the National Union of Peoples Lawyers, the Philippine government was requested to submit their report about the comments on the previous Universal Periodic Review last September but they have not done so. He said it may affect the result of the review. “Of course, it will have an impact in the result of the review because the requested report is the compliance from the previous comments and findings. They want the Philippine government to correct especially the issue of human rights and other related issues” Cortez said. (Alanna Ambi/DMS)