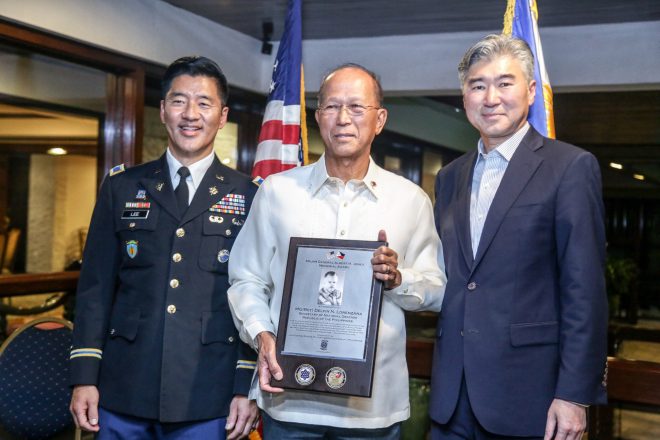 Lorenzana gets award during JUSMAG celebration

Defense Secretary Delfin Lorenzana was awarded with Major General Albert Jones Memorial Award during the Joint United States Military Assistance Group’s ( JUSMAG) 70th anniversary celebration on Thursday. US Ambassador Sung Kim and Col. Ernest Lee presented the award to Lorenzana during the celebration hosted at the US Chief of Mission residence. In a press release, the US Embassy stated that Lorenzana was awarded “for his steadfast commitment and invaluable contributions to the alliance of the US and the Republic of the Philippines.” In a text message to the Daily Manila Shimbun, Lorenzana admitted that he thought he did not deserve the award but he noted he is honored to receive it in behalf of the people who work with the Joint United States Military Assistance Group. "I did not think I deserve it but I was honored to receive it for all those who worked with JUSMAG to improve our military capabilities," he said. "I have just been in the job eight months, I have not worked with Jusmag before that. It is unbecoming if i refused it and I have said that on my acceptance speech," Lorenzana added. “The Major General Albert Jones Memorial Award recognizes a U.S. or Philippine government official who has made significant contributions to the bilateral defense partnership,” it stated. The embassy emphasized that “General Jones first commanded the 51st Division of the Philippine Army in 1940, and then commanded the 1st Philippine Corps until his capture at Bataan in 1942.  Of the 76,000 Philippine and American soldiers, Jones was the only general officer on the infamous death march.” “He was held as a prisoner of war for over two years, and was among the many who endured torture and starvation.  In testament to his grit, tenacity, and courage, Jones returned to the Philippines in 1946 to lead the US military advisory mission in Manila, which evolved into JUSMAG a year later,” it said. “JUSMAG’s initial mission was to advise and assist with training and equipping the Armed Forces of the Philippines.  Since then, the group has evolved to coordinating with the Armed Forces of the Philippines to develop all U.S.-Philippine military training activities,” the embassy added. (Robina Asido/DMS)