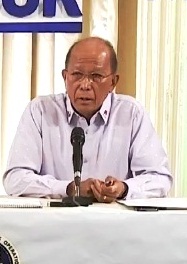 Defense Secretary Delfin Lorenzana, administrator of martial law in Mindanao, denied  issuing an “Arrest Order No. 3”. “In my capacity as martial law administrator, I have not issued any Arrest Order No. 3, thus, any copy of the document being circulated is fake,” he said. “I call on everyone not to share this fake news to avoid confusion, and not to jeopardize our current operations,” Lorenzana added. Lorenzana issued his statement after receiving reports an Arrest Order No.3 is being circulated. Lorenzana said every announcement related to the implementation of Martial Law in Mindanao will be officially disseminated by the government. President Rodrigo Duterte imposed martial law in Mindanao last May 23 in the wake of the attack by the ISIS-linked Maute-Abu Sayyaf group in Marawi City. (Robina Asido/DMS)