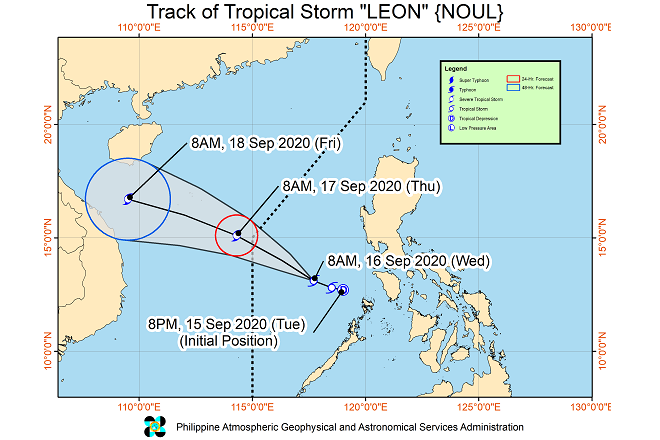 A low pressure area strengthened into a tropical storm early Wednesday as its  center  was spotted at 330 kilometers west northwest of Coron, Palawan, the Philippine Atmospheric Geophysical and Atmospheric Services Administration (Pagasa) said.

In its 10 am bulletin Tropical Storm "Leon" was packing maximum winds of 65 kph and gusts of up to 80 kph while moving west northwest at the speed of 15 kph.

Pagasa said while there is "no tropical cyclone wind signal is currently in effect. However, intermittent gusts due to the southwest monsoon may be experienced over Batanes, Babuyan Islands, Mimaropa and Western Visayas."

Light to moderate with at times heavy rains will be experienced over eastern Cagayan, Isabela, Nueva Vizcaya, Quirino, Metro Manila, Calabarzon, Bicol Region, Mindanao, and the rest of Central Luzon, Mimaropa, and Visayas," it added.

Pagasa said ''Leon'' is expected to be at 455 km north of Kalayaan, Palawan or outside the Philippine Area of Responsibility by Thursday morning. Robina Asido/DMS