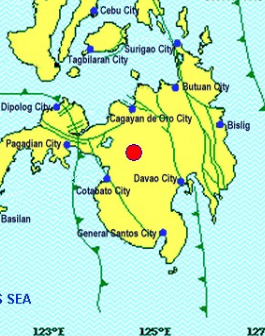 A magnitude 5.2 quake jolted Wao, Lanao del Sur on Easter Sunday.
The Philippine Institute of Volcanology and Seismology has recorded the quake at 14 kilometers north, 59 degrees west of Wao at around 4:40am.
The agency reported that the earthquake with a depth of 3 km was tectonic in origin.
Because of the earthquake, Intensity V was recorded over Wao, Lanao del Sur; Intensity IV  in Kalilangan, Bukidnon; Intensity III in Cotabato City; and Intensity II in Cagayan de Oro City, and in Pangantucan, Maramag, Valencia City and Quezon, all in Bukidnon.
The report also noted that based on instrumental intensity, the Intensity II was also recorded in Cagayan de Oro City and Cotabato City, while Intensity I in Alabel, Saranggani and Mambajao, Camiguin.
In a television interview, Phivolcs officer-in-charge Marcial Labininay said 396 earthquake activities have been recorded in Lanao del Sur following the magnitude 6.0 tremor last Wednesday.
"We have recorded 396 earthquake events, 90 plotted earthquakes and 32 filed events related to the 6.0 magnitude in Lanao," he said.
Since last Wednesday's earthquake, the National Disaster Risk Reduction and Management Council, in its latest report, said a total of 308 houses, nine schools, 11 churches and mosques, 12 other facilities were damaged in Lanao del Sur and Bukidnon.
A total of 207 families or 1,035 individuals from five barangays of Wao were affected because of the earthquakes. (Ella Dionisio/DMS)