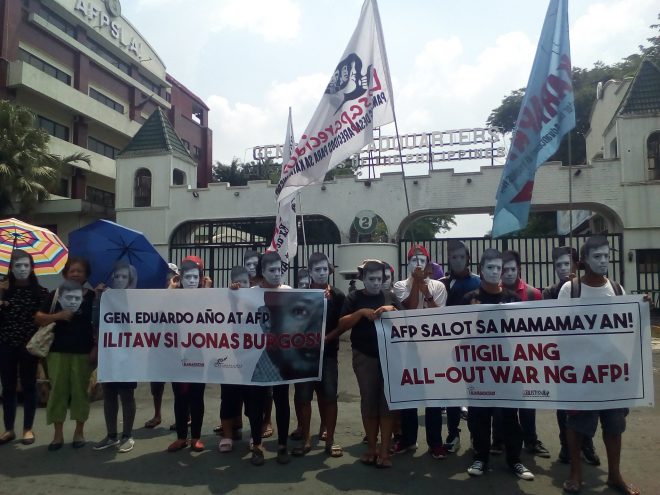 Members of militant groups mark the 10th year disappearance of Jonas Burgos with a protest action in front of a gate of Camp Aguinaldo on Friday morning. Aside from Desaparecidos, an activist group that were composed of the relatives of the victims of forced disappearance, the protest action were also attended by other militants group such as Selda and Hustisya. Burgos, the son of the late Philippine press icon Jose Burgos Jr who founded We Forum and Malaya during Martial Law, was abducted in a mall by unidentified men. The rally that was conducted around 10:30 am yesterday was joined by more than 40 people. Desaparecidos Chairman Concepcion Empeño said the protest, conducted in front of the gate of Camp Aguinaldo was ended around 11:30 am. Most of the protesters wore a mask of Jonas face, Empeño said, to disturb those who were involved in his disappearance. “Let Jonas’ face be marked in their memories. Let it disturb them. After three regimes and a decade, let this be a testament that we continue to look for him, and demand justice for Jonas and all the military abducted and made to disappear,” she said. Empeño said the “group singled out AFP Chief of Staff General Eduardo Año one of the military officials linked to the disappearance of Jonas, and condemned the AFP chief’s lead in the military’s all-out war against the people.” “Gen. Eduardo Año rose to his position as AFP chief with the blood of those killed and disappeared under their reign. He continues to enjoy power over the military and escape from accountability. Tell us, Gen. Año, after ten years, where now is Jonas?” she said. Empeño said all families of desaparecidos demand justice be served for Jonas. The represent thousands of desaparecidos abducted and disappeared under different regimes. “With Jonas came a face for the many faceless desaparecidos who thirst for justice and all the families who want to know what happened to their loved ones,” she said. “But with these military officials in power, and while the military remains as the state’s implementer of the worst abuses and injustices, what justice could we, families of desaparecidos, expect from this?” she added. Empeño said the group also called on people to demand the accountability of the AFP for its crimes. “As long as the military remains as the main instrument in suppressing the people’s aspirations for genuine peace and justice, we should continue searching. This is our tribute to missing. We will continue to hound them, in the name of justice,” she said. (Robina Asido/DMS)