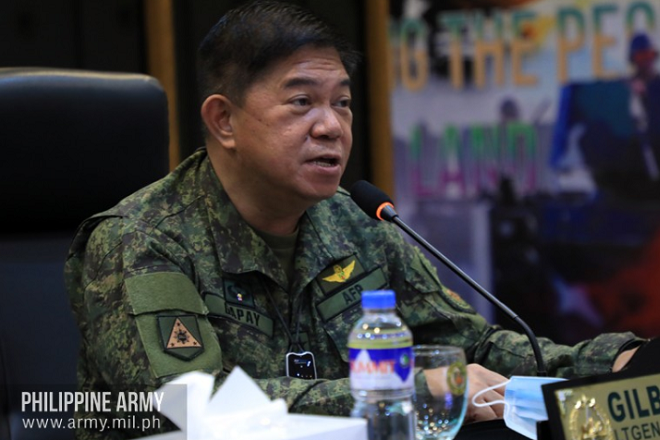 Armed Forces of the Philippines (AFP) chief General Gilbert Gapay ordered military commanders to dismantle all the guerilla fronts of the New People's Army (NPA) by end of this year.

Capt. Jonathan Zata, AFP public affairs chief, said the directive was issued by Gapay in the yearend command conference attended by top military commanders and officials of the AFP on Friday.

"All remaining communist guerrilla fronts shall be simultaneously addressed and defeated toward the end of 2021. I noticed a lot of these New People's Army units have been weakened so this is our target for all the Unified Commands," Gapay said.

"Focused military operations shall be intensified in order to destroy the armed groups, taking advantage of our newly acquired game-changer assets," he added.

Zata said "all commanders of different area commands were allowed to set priority targets per quarter along with their task to expedite the clearing of identified focus areas to hasten the dismantling of remaining guerrilla fronts.

"He said a total of 54 so-called guerrilla fronts remain with nine other regional armed groups which are decimated and on the brink of collapse.

"This is after the AFP reported the successful dismantling of 22 of these communist fighting and propaganda units," said Zata.

He said the AFP units were also tasked to develop innovative employment of joint operations supported by enhanced and modernized intelligence gathering.

Zata said in defeating local terrorist groups, Gapay also directed AFP units to further intensify focused military operations along with the conduct of "preventing and countering violent extremism" programs to avoid the radicalization and recruitment of vulnerable sectors and communities.

"We have significantly decimated these groups such that we could target to catch up on our goals toward the end of the first semester of this year," said Gapay.

Zata said "the Abu Sayyaf Group in particular have incurred setbacks in all threat parameters, including the reduction in its manpower and firearms that stand at 171 and 182 respectively at the end of 2020."

"On the other hand, the Bangsamoro Islamic Freedom Fighters, which remains as the primary spoiler in Central and Western Mindanao, have also incurred losses in all areas," he said.

In territorial defense, Gapay tasked both field units and the AFP general headquarters to  review lines of operations, lines of efforts and key tasks to ensure that the AFP remains effective in responding to prevailing situations"We need to adjust to effectively address the growing challenges in the West Philippine Sea," Gapay said.

Gapay said Northern Luzon Command  and Western Command were designated as area task force chairs to rationalize the use of maritime patrol assets in coordination with the Philippine Coast Guard and other maritime law enforcement agencies.

"I enjoin everyone to observe excellence and professionalism in the performance of our duties while living up to our core values of honor, service, and patriotism," Gapay said. Robina Asido/DMS