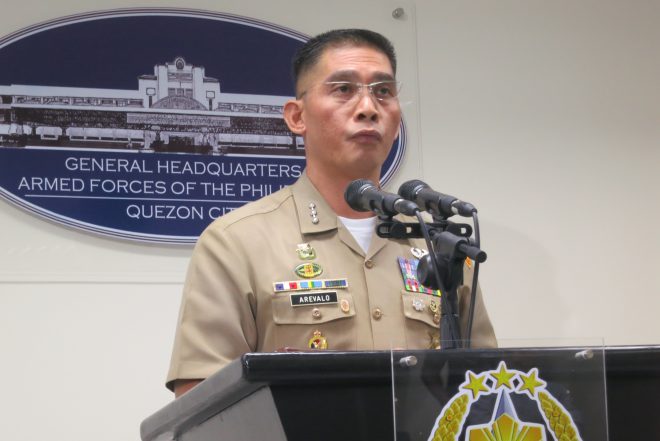 Military to NPA: stop violence if you are sincere with peace talks

The Armed Forces of the Philippines (AFP) urged the New People’s Army (NPA) to stop their violent activity to show their sincerity to resume peace negotiation. “If the NPAs are really sincere and one with the National Democratic Front (NDF) in their intent to resume the talks with government, they should start manifesting their intention by putting a stop to their terroristic activities which continue to harm our citizens and halt development in the communities,” Marine Col. Edgard Arevalo, AFP public information chief said. Arevalo said just a week after the Philippine government Panel and the NDF announced their intent to return to the negotiating table, the NPA continued its violent activity which include burning and harassment by the rebels. He said last March 13, a commercial transport bus was burned by the NPAs in Makilala, North Cotabato, while a delivery van owned by Fighter Wine Company was burned in San Fernando, Bukidnon on the same day. It can be recalled that hundreds were also displaced after the rebel group attacked a community in Brgy. Hinimbangan, Kitcharao in Agusan Del Norte on March 15. “While the AFP sees that the NDF continues to push for the resumption of the peace negotiations, it is clear that they are also losing hold of their men on the ground,” Arevalo said. “The NPA, with their twisted ideals are attacking innocent civilians, extorting money or burning private properties,” he added. Arevalo said based on their latest report the NPAs have conducted 62 terroristic activities since the start of the year. “These include abduction, burning or arson, extortion, ambush and harassment against both civilians and military members,” he said. “On our part, we will continue to conduct combat operations against the terrorist NPAs until we receive an official communication from the Office of the President suspending the all-out war,” he added. Arevalo said the military operations have so far resulted to the neutralization of 129 NPAs; of which, 23 were killed, 19 were arrested and 87 surrendered. “At present, the operations against the NPA already yielded 83 firearms from the NPA; 22 were surrendered while 61 were recovered during operations. The casualties on our side are now at 53, of which 14 were killed in action, 36 were wounded, and three were abducted,” he said. (Robina Asido/DMS)