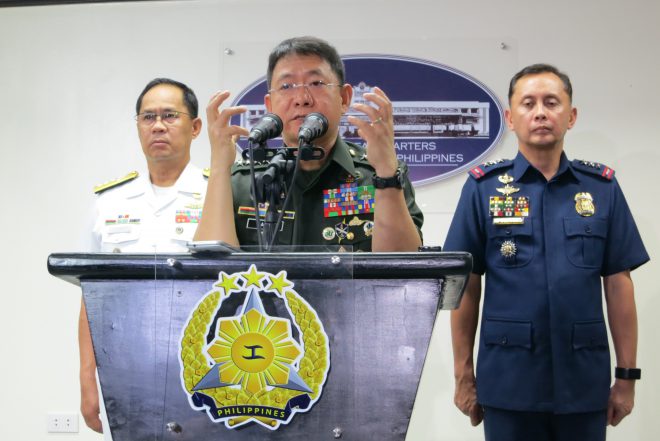 The Armed Forces of the Philippines (AFP) welcomed the one million peso bounty offered by President Rodrigo Duterte for the neutralization of the remaining Abu Sayyaf members in the province of Bohol. “It will help a lot you know to give incentives to the local people of the community. Maybe others were afraid and do not want to be involved. So it’s an incentive, sometimes the fear were conquered by incentive… Incentive should not be needed because this is for their own good…. It is welcome development… that they (public) will help on our fight against terrorism,” AFP Chief of Staff General Eduardo Ano said Thursday. “That will facilitate the arrest or surrender of the remaining terrorists who are now still in Inabanga and in hiding trying to evade security forces hunting them,” he said. "These loathsome band of criminals will not just be hounded by sniffing dogs of the AFP but by local residents who will be a million peso or more richer by merely providing information leading to the neutralization of the former,” he added. Ano said the public would needs to provide information that will led to the arrest of the terrorist to be able to claim the bounty. "No need to provide anything but information. Just information that led to the arrest of the terrorists--dead or alive," he said. Col. Edgard Arevalo, AFP public affairs chief, said “Bohol Governor Edgar Chato expressed elation and gratitude, on behalf of his provincemates for the support from President Duterte.” “He says the physical presence of the President surely boosts the Boholanos as it is reassuring,” said Arevalo. “He (Chato) feels the bounty will be of great help to flush out the remaining terrorists on the run,” he added. (Robina Asido/DMS)