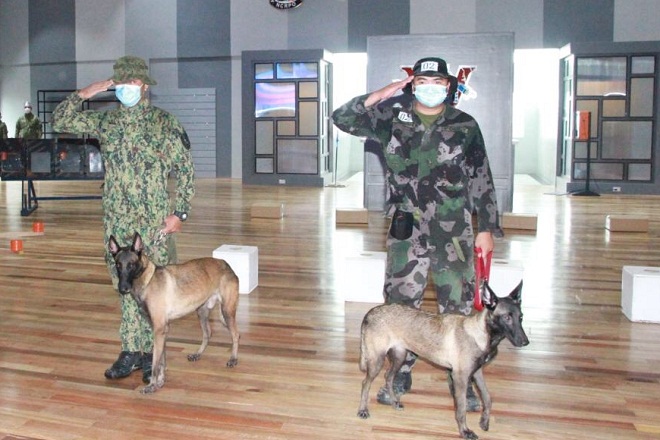 NCRPO beefs up K9 unit vs explosives and drugs

Police Major General Debold Sinas said the dogs will form part of the frontline team to boost the intensified campaign of NCRPO against the spread of illegal drugs and ensure safety of vital installations within its area of responsibility through timely detection of threats.

During the press briefing, the dogs identified the box that contains suspected explosives or narcotics among several boxes on the ground.

Once detected, the dog sits near the box, signaling positive identification of explosive or narcotics scent.

"Considering the intensification of the PNP’s campaign against illegal drugs, and the current threat posed by lawless elements against vital installations in Metro Manila, it is just (right) that we increase the competence of our EOD/K9 Unit,” said Sinas.

The dogs will be deployed as an additional force during shock and awe operations.

NCRPO said they are the first to introduce this initiative as a team of  Narcotics Detector Dogs and handlers in addition to the present team Explosive Detector Dogswas realized during Sinas time.

"As for me, this team of expert narcotics canine and handlers is inevitable in our fight against this deadly substance considering the trend of illegal drug trade in Metro Manila nowadays,” he said.

Training was done to increase stamina, alertness and endurance of Explosive and Narcotics Detector Dogs which will soon be deployed to different explosive and narcotics related police interventions in the NCR.

"Considering the distinct and diverse factors affecting police intervention in Metro Manila and the number of vital installations installed, NCRPO utilizes all available methods to upgrade its delivery of police service,” Sinas said.

“I am elated with the unwavering effort of our EOD/K9 Unit to uplift its capability and skills through training and innovations not only in bomb detection and disposal but also in narcotics detection which will ultimately result in a more orderly and safe Metro," he added.

The EOD/K9 Unit is mandated to conduct safe disposal of bombs and neutralization of hazards from chemicals, nuclear, and improvised explosive devices (IED) which threatens public safety, installations and utilities as well as police operations and personnel. Ella Dionisio/DMS