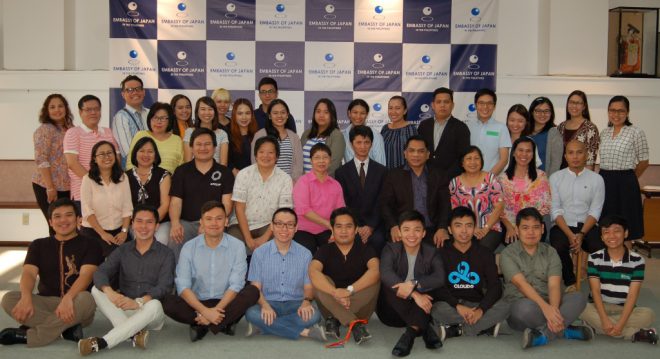 A pre-departure orientation was held for the newest batch of scholars under the Japanese Government Scholarship on March 18, 2017 at the JICC Multipurpose Hall, Embassy of Japan. Set to fly to Japan this April, the group of scholars is composed of 22 students under the Research Category and one student under the Specialized Training Category. The event was conducted by the Japan Information and Culture Center (JICC) in partnership with the Philippine Association of Japanese Government Scholars (PHILAJAMES). PHILAJAMES President Jose Camacho, Jr. formally opened the occasion with his welcome remarks, before leading an introduction of the upcoming scholars and the members of PHILAJAMES. Japanese Government alumni Dr. Rogel Mari Sese and Dr. Nappy Navarra gave their insights on the scholarship and share their experiences during their stay in Japan. A short lecture on student life in Japan and an open forum followed, and the event was then closed by JICC Director Ken Nakamura with a send-off message for the new scholars. The Japanese government scholarship has been giving students from all over the world a chance to study in Japan’s top universities since its establishment in 1954. Over 3,000 Filipino students have received a scholarship in one of the following categories: Japanese Studies, Teacher Training, Research, Undergraduate, Specialized Training, and College of Technology. DMS