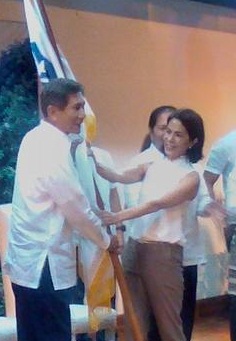 Newly-installed Environment Secretary Roy Cimatu vowed on Wednesday to protect the environment and make sure the mining law is followed. Cimatu formally assumed his post as the Department of Environment and Natural Resources (DENR) chief replacing Regina Lopez whose appointment was rejected by the Commission on Appointments. According to Cimatu, his career in government was guided by three "Ps." "My third 'P' as secretary of the DENR is to protect the environment and safeguard the mining laws that they should be implemented," he said during the turnover ceremony, which was also attended by Cimatu's classmates from the Philippine Military Academy and other former colleagues in the military. His two other Ps are protecting the people and the land from the enemies of the state when he was  a soldier, and protecting the Filipinos and put them out of harm's way when he was special envoy to the Middle East during the administration of former President Gloria Macapagal-Arroyo. As the new DENR secretary, Cimatu said the mining sector should follow the law in extracting mineral resources. Lopez was rejected by the CA following her strong stance against mining. She had ordered the closure of 23 mining projects, suspension of five others, and cancellation of 75 mineral production sharing agreements. Asked what he would do so he will not suffer the same fate as Lopez's, Cimatu told reporters in an interview, "just do my job the best I can. It's okay. No problem." He said next week he will go to Mindanao to meet with the mining companies. He warned of ordering closure of mining projects if companies would not follow mining laws and regulations. Celerina Monte/DMS