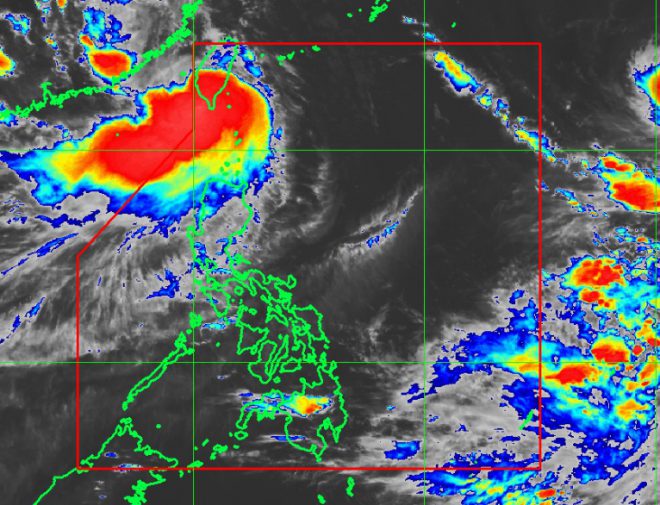 A new tropical storm, which weather forecasters named Huaning, entered the Philippine Area of Responsibility after Typhoon Gorio left early Sunday morning. As of 5pm, Philippine Atmospheric, Geophysical and Astronomical Services Administration (Pagasa) forecaster Aldczar Aurelio said Huaning slightly intensified and accelerated. Huaning was last spotted at 215 km northwest of Basco, Batanes with winds of 80 kph and gusts up to 110 kph. It was forecast to move north at 24 kph. Aurelio said Huaning will continue to enhance the southwest monsoon that will bring moderate to occasionally heavy rains over the western section of northern and central Luzon. Tropical Cyclone Warning Signal Number One was raised over Batanese, Ilocos Norte and  northwestern Cagayan, including the Babuyan Group of Islands, said Aurelio. It is expected to leave the Philippine Area of Responsibility Monday afternoon. Aurelio said good weather may be experienced starting Tuesday. He said the weather bureau is not expecting any cyclones by the next few days. "We may experience 2-3 cyclones by August," he added. The National Disaster Risk Reduction Management Council on Sunday recorded a total of 2,739 persons affected in Luzon region after Typhoon Gorio enhanced the southwest monsoon last week. The council said a total of 639 families or 2,739 persons were affected in National Capital Region, Regions I, III and Calabarzon where 111 families or 504 persons were inside five evacuation centers. Flashfloods were experienced at Brgy. Sto. Rosario, San Fernando City in Pampanga while six landslides were reported in NCR and Cordillera Administrative Region. While, 118 areas in Regions I, III and NCR were reported flooded. Also, 32 houses were totally damaged and 83 were partially damaged in Regions I and Calabarzon. Damage to agriculture in Benguet and Ifugao province was estimated at P2.3 million. (Ella Dionisio/DMS)