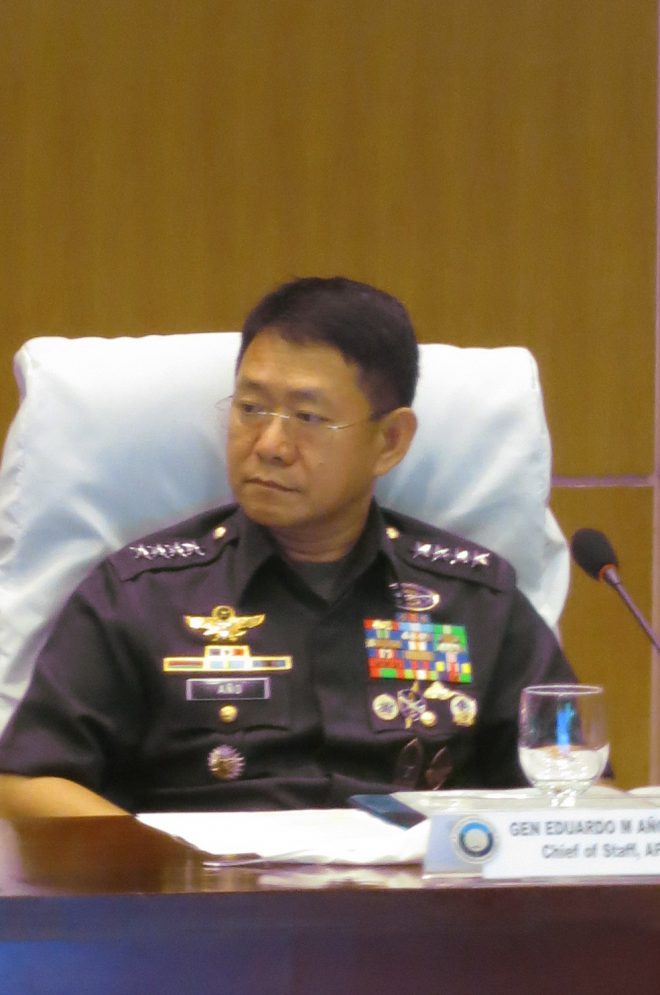 No more timelines to clear Marawi but to destroy Maute-ISIS in “one decisive major battle”: Ano

Armed Forces of the Philippines Chief General Eduardo Ano said they are doing well on their fight against terrorist groups, but added the military “not be pressured nor bounded by timelines” in clearing Marawi City of the Maute- ISIS Group. "While the Marawi siege caused by Maute-ISIS is catastrophic, painstaking and destructive, the AFP  with our gallant soldiers will ensure to destroy the entire group in one decisive major battle. We will not be pressured nor bounded by timelines," he said in a statement on Sunday. He said the order of President Rodrigo Duterte, is to finish the Maute group and clear the Marawi to pave way for the rehabilitation and reconstruction of the city so that normalcy is restored at the soonest possible time with minimum loss of lives, both soldiers and civilians. Ano said they have neutralized a total of 519 terrorists since January 1 until June 30, 2017 where 178 people were from Abu Sayyaf Group and 317 from Maute-ISIS Group. The government troops also recovered a total of 548 firearms which is a significant reduction to the terrorists’ strength and capabilities. "We have prevented or minimized piracy and kidnappings," Ano said. He also said the desperation of the Maute group to be recognized by the Islamic State of Iraq and Syria prompted them to stage the rebellion and occupy Marawi City. Ano said the military will do their job "with highest dignity and code of conduct of the professional soldier, and respect to human rights for our country, for the people and for our soldier heroes who ultimately gave their lives for this cause." (Ella Dionisio/DMS)