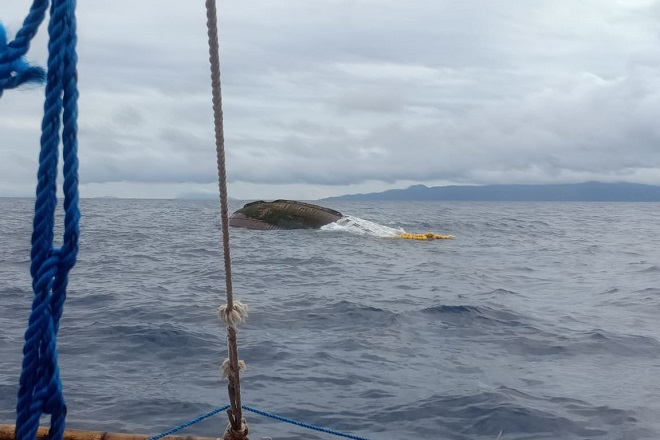 No survivor found yet in collision of fishing boat, cargo vessel: PCG

The Philippine Coast Guard (PCG) said its search and rescue team has not seen any of the 14 missing Filipino crew of a fishing vessel which collided with a Hong Kong registered ship Saturday night off Occidental Mindoro.

But PCG Commandant George Ursabia said he is ''hopeful that with the strong southwest monsoon we are anticipating that some of them have reached the coastlines of Mindoro so we have already alerted the coastal areas for such possibility.''

''We are praying that such kind of condition will arise because the results of the scouring of the sea area there is no life and survivors at all..up to this moment," Ursabia said.

The collision between the fishing boat and a Hong Kong flag cargo vessel off the waters of Occidental Mindoro was caused by poor visibility, said Ursabia, citing initial investigation.

"There was a heavy downpour and then its midnight, almost midnight already, not to mention also poor sea condition because of the strong southwest monsoon," he said.

Ursabia said the PCG is checking other aspects on the ongoing investigation.

"There are other aspects to be checked and considered, one of which, of course is the competence of the crew, especially the one who was on watch at that time of the bulk carrier. Because at that time, it was the third mate and you know the third mate is the most junior officer on board a ship. So we have to check his competence," he said.

"We will also check the equipment onboard because during night navigation.. one of the instrument that we rely on when navigating is the radar. We have to check if their radar is functioning well, and likewise we have to check also the navigation lights because at night we are dependent also on the kind of light that we are seeing. The color of the light. There are white, red, green, for us to know if we are meeting the vessel, if the vessel is crossing or are we following the vessel and so on," he added.

Ursabia said initial investigation showed that the area of the fishing vessel'' that was hit was the port side or left part.''

''It seems that it was hit not only once. It seems that there are succession (of hits), based on the judgement of the diver when they responded before it sank. Even its hull, the bottom hull, maybe after it capsized it was still hit again," he said

"It shows that the (HK registered vessel) Vienna Wood was hit on the front part. It seems that the fishing vessel crossed from the right of the bulk carrier," he added.

Ursabia said the cargo vessel were able to report the incident at the PCG headquarters three hours after the collision.

"The incident happened at 2220H of Saturday night and our command center here at the national headquarters PCG was able to receive the distress signal call from that ship at around 0146H on 28 June,'' he said.

Ursabia said ''it was through email that we received such distress call."

The PCG chief also noted that the crew of the cargo vessel failed to help or rescue the fishermen right after the collision.

"According to them, they just stopped and remained the area without deploying  any small boat to conduct search and rescue or immediate assistance to the fishing vessel. They did not leave the area for reason that there were already a number of fishing vessels present in that area not to mention also that their ship is very big that they have to maneuver it far from the small vessel, because of safety reason considering the sea condition at that time,'' he said.

Vienna Wood, the HK registered cargo vessel, '' did not leave the area but they were not able to launch their own team to conduct immediate assistance or search and rescue assistance to aid the fishing vessel," he said.

"That is one of those (things) that we are going to consider in conducting an investigation because we have to establish liabilities here because of such accident it's possible, and it's possible that they will have criminal and civil liabilities also in this case but there has to be due process for such," he added.

"We want to finish the investigation in five to seven days starting from yesterday," he said. Robina Asido/DMS