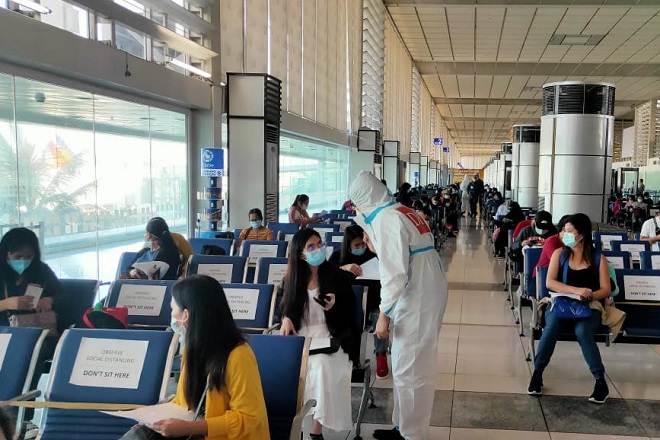 The National Task Force COVID-19 is eyeing to "de-clog" the quarantine facilities for returning overseas Filipino workers within two weeks so that the government could increase to about 1,000 a day the number of Filipinos who would be allowed to enter the country, an official said on Friday.

NTC Chief Implementer Carlito Galvez Jr. noted that currently, the government is implementing regulated inbound travel at the Ninoy Aquino International Airport, which could only accommodate up to 4,000 passengers.

Galvez said that the government has already conducted tests to about 30,000 returning OFWs and about 600 of them were found positive for COVID-19.

However, most of the repatriated OFWs have remained in various quarantine facilities in Metro Manila as they are still awaiting the results of their tests.

Once the quarantine facilities are de-clogged, Galvez said, "little by little, we will increase our entry quota to more or less 1,000 a day."

"We are empathizing with their (OFWs') plight because the situation of our fellowmen abroad is really difficult. But we will do our best to fast-track the process," he explained.

Some 42,000 OFWs are expected to arrive in the country in the coming days until June.

At the same time, Galvez said the government is preparing for further influx of OFWs as some of them could be carriers of COVID-19 as they came from countries where there are high cases of infections, such as the United States, Italy, Spain and other parts of Middle East.

"So, we are looking into it, as it could be possible to have a second wave," he said.

The official said all the concerned agencies are preparing measures such as the establishment of one-stop shops in other airports in the country to immediately test the returning OFWs and for quarantine facilities where they would be placed while waiting for the results of the tests. Celerina Monte/DMS