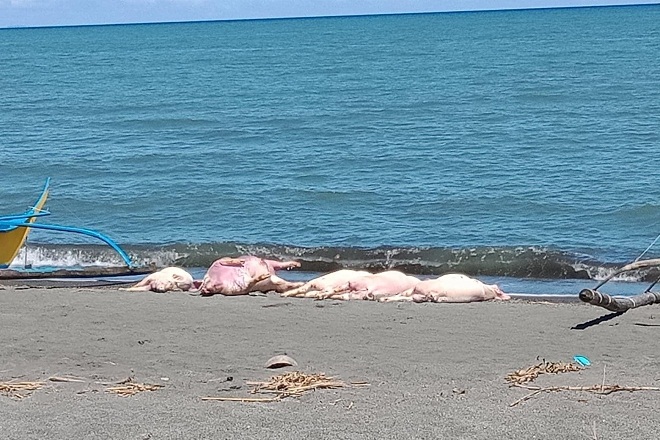 The mayor of Naujan, Oriental Mindoro on Tuesday said they believed dead pigs found floating in their town’s beach last Monday were thrown from a cargo ship.

“Yesterday, I was with our municipal agriculturist and members of the provincial veterinary office. We suspect that these (pigs) were thrown out by the ship that passed by our area,” Mayor Mark Marcos said in a radio interview.

Marcos said the ship allegedly came from the Visayas going to Manila.

He said around carcasses of 10 pigs were found in different barangays.

“When I went to the shores in Barangay Estrella, we saw five pigs and in the afternoon someone reported from the other barangay that they found two. And last night, I talked to the barangay and they informed me that two pigs were washed up. Maybe around nine or 10 pigs were washed up in Naujan,” the mayor said.

Marcos said the incident is the same as  in the town of Pola where dead pigs were also found. He said the pigs were tested negative from African Swine Fever (ASF) and were  buried.

Marcos said the residents panicked as most are raising pigs as their livelihood.

“So what we did is we carefully handle (the dead pigs). We disinfect it and immediately bury it,” he said.

He said their town has no record of ASF cases.

“We don’t have cases because we are strict here in the province. We don’t even allow processed meats because it’s dangerous… (Our) small hog raisers will be affected,” Marcos said.

He said they got a sample from the dead pigs and sent it to their regional animal disease diagnostic laboratory for examination.

The Provincial Public Information Office of Oriental Mindoro reminded residents, especially those living near where the pigs were found, to not butcher and eat the meat to prevent infection. Ella Dionisio/DMS