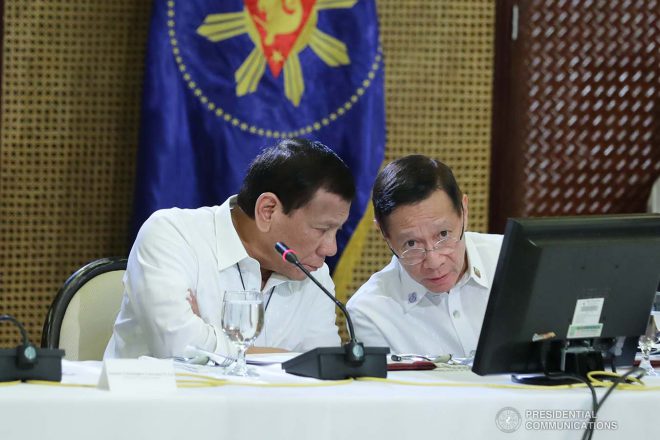 President Rodrigo Duterte's apparent clearing of Health Secretary Francisco Duque III from any possible criminal liability over the alleged anomalies in the Philippine Health Insurance Corp. did not influence the findings of the Department of Justice-led multi-agency task force, Malacanang said on Tuesday.

In a taped televised meeting on Monday night, Duterte read the recommendation of the task force following its month-long investigation on the alleged PhilHealth mess.

"The task force recommends that the President strongly admonish and remind the chairman and members of the board of a grave consequence of their action or inaction to PhilHealth fund to the government and its coffers and to the interest of the ordinary people who rely on PhilHealth assistance," Duterte said, quoting the report.

The recommendation of the task force was contrary to the findings of the Senate that investigated also the controversy. The Senate recommended the filing of criminal and administrative charges against Duque.

In a taped televised meeting last week, Duterte, in front of Duque, said that the most that the Health chief could face in relation to PhilHealth controversy would be negligence. This prompted some senators to say that Duterte apparently already cleared Duque of any criminal liability.

"It's not, because if it's so there should no longer be a recommendation of admonishment," said Presidential Spokesperson Harry Roque when asked if Duterte's earlier statement in favor of Duque could have influenced the findings of the task force.

Roque said that while there is already a recommendation, the DOJ would continue with its investigation and collect more evidence against individuals who would be charged.