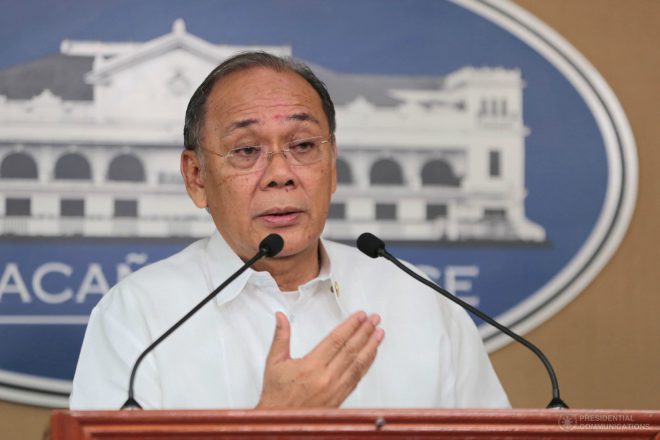 Malacanang has expected the dismissal of the impeachment complaint against President Rodrigo Duterte by the House committee on justice. In a statement on Monday, Presidential Spokesperson Ernesto Abella said the Palace maintained the impeachment complaint filed against Duterte "was from rehashed, trumped up charges aimed at undermining the duly constituted government." The House of Representatives justice panel has declared the impeachment complaint filed by Magdalo Representative Gary Alejano against Duterte as insufficient in substance. "The president respects a co-equal branch of government and does not interfere in the political exercise. Neither is he beholden to any group and he remains focused on governance," Abella said. He said Duterte is in China to bring more foreign investments in "his effort to bring comfortable lives to all Filipinos." "The improvement of the welfare of the Filipino people is the paramount consideration," he added. Chief Presidential Legal Counsel Salvador Panelo reiterated that the impeachment complaint against Duterte would not prosper. "As I have repeatedly said in my interviews, the impeachment complaint will not reach first base because the allegations are based on hearsay. Others are outright false," Panelo said in a separate statement. "The complaint is intended to besmirch the reputation of PRRD and to get the three minute of fame of the complainant," he added. Alejano accused Duterte of having a hand in the alleged extrajudicial killings involving drug suspects and for failure to uphold the country’s sovereign rights over the West Philippine Sea, Panatag Shoal and Benham Rise amid the administration’s warming ties with China. (Celerina Monte/DMS)