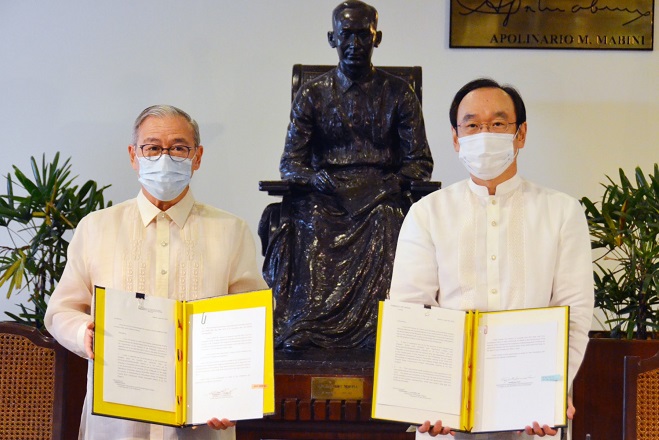 The Exchange of Notes covered the following:

* Cebu-Mactan Bridge (4th Bridge) and Coastal Road Construction Project: With an estimated total cost of JPY 119.225 billion, it involves among others the construction of a 3.3-kilometer bridge with a 3.385-km. elevated viaduct of two lanes per direction, and a 4.9-km., four-lane coastal road with a 4.751- km. viaduct.

* Davao City Bypass Construction Project II: Costing JPY 34.830 billion, the project represents the next phase in the construction of a 45.2-km. road, together with tunnels and other associated infrastructure, to divert traffic away from Davao City center.

* Non-Project Grant Aid for the Economic and Social Development Programme for the Department of Health: Japan is extending up to JPY2 billion in grant aid to provide five CT scan machines, five X-ray machines, one MRI system, ten hemodialysis machines, and four infectious disease surveillance sites. These equipment are seen to support the DOH’s response to COVID-19 and other health emergencies.

* Non-Project Grant Agreement on the Economic and Social Development Programme for the Sugar Regulatory Administration (SRA): Amounting to JPY800 million, the project is a follow-up to the 2001 grant aid farm mechanization program supported by the Sugar-Agricultural Competitiveness Enhancement Fund. It will fund, among others, 94 units each of tractors, harrows, wholestalk sugarcane planter, and munchers.

The exchange of notes further cements Japan’s status as the Philippines’ top provider of ODA for the decades, and a vital partner in achieving the country’s development goals. In Tokyo last year, President Duterte called Japan the “gold standard” for Philippine development cooperation with foreign partners.