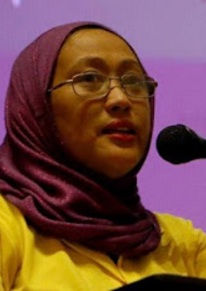 The Philippines should give more attention to violent extremism said Jehanne Mutin, chairwoman of the Regional Commission on Bangsamoro on Friday. "It's seems so far away from Manila but it's not. Violent extremism is a global phenomena and if we still don't give the same weight, if we don't look make it like an important subject matter, don't wait until you turn out like us, like Marawi City. It's been there and we didn't think about it and the next morning it happened," said Mutin in a forum. Mutin told the story of Amina, a resident in Marawi. Amina is a mother to two special children and adopted orphaned nephews and niece. Amina's special son got sick and she believed the cause was the water given in the evacuation center where they stayed for four days and in  household homes, she said. The family had to travel to Iligan City after visiting a district hospital that does not have the facility to treat the child. Amina collapsed after arriving in the hospital and when she woke up her special son died,  Mutin said. "Now, she has to bring her dead son back to Lanao del Sur where she had to bury the dead son. But her problem is to where to leave the other special child, the daughter. Her daughter were left in an office which has the staff has, so the kid was left there" she said. Amina and her children were turned down by apartment owners and had to pose as Christians to get a small apartment, she said. The bombardment and gunfight between the government and the Maute group is ongoing, she said. " If you talked to the people, the community we're talking about a fragile pace now and talking about the impact of BBL ( Bangsamoro Basic Law) what has happened and we can't talk about peace if we don't talk about violent extremism that has happened", Mutin said. Philippine Red Cross said Friday the number of evacuees has reached more than more than 300,000, including residents in nearby places who feared the battle may reach their homes. About 200 to 300 civilians are still trapped inside Marawi City according to the Crisis and Management Committee, it said. PRC said according to health authorities "difficult situation in evacuation centers" may have caused the illness that killed around 27 displaced individuals. "Hygiene,sanitation, and proper shelter--especially now during rainy season are among the growing concerns in congested evacuation centers", it said. Alanna Ambi/DMS