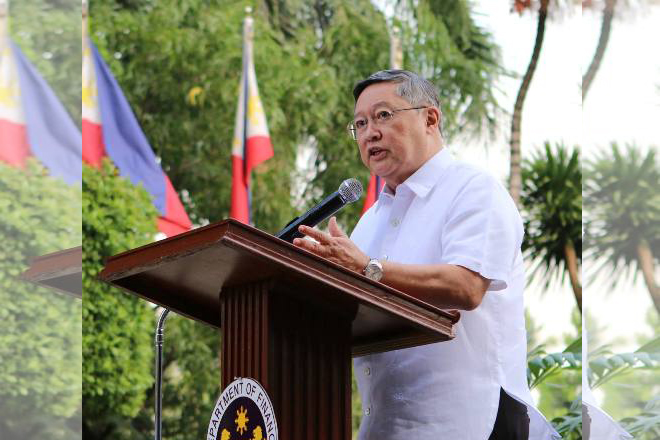 The Philippines remains in a good financial position despite the health crisis but there is a need to further open up the economy, said Finance Secretary Carlos Dominguez III.

The Department of Finance chief said the government has able to prepare well, citing the passage of the Tax Reform for Acceleration and Inclusion Act and the Rice Tarrification Law, among others, prior to the coronavirus pandemic.

"We are still - we are in a good financial position. We are not under duress. We have a good economy," Dominguez said during a taped televised meeting with President Rodrigo Duterte on Monday night.

However, he noted that the very strict quarantine measure is affecting the economy.

Thus, Dominguez said, "We have to really open the economy more."

Metro Manila, which is the biggest contributor to the economy, however, remains under general community quarantine due to high cases of COVID-19.

Under the quarantine protocols, there are sectors and industries that are not allowed to operate or could not fully open yet.

Despite the non-operation yet of some businesses, Domiguez said the government is "in good financial position and we can finance the deficit that we have."

He said the government has not slash its budget because if the administration would do it, this "will make the situation even worse."

The Finance chief noted that from January to September, the Bureau of Internal Revenue and the Bureau of Customs were able to collect P1.821 trillion, higher than the estimated collection of P1.682 trillion, although 12 percent lower compared to last year when there was no pandemic yet.

Aside from revenue collection, he said the government's another source of funds is  loans, which most of them are from the domestic market.

He noted that due to the liquidity being provided by the Bangko Sentral ng Pilipinas to the banks and the local market, the government could easily borrow.

As to loans overseas, he said they are still coming in.

"We have signed up almost nine billion dollars worth of loans. The interests of these loans are very low and the term is very long," he said.

Dominguez thanked the multilateral agencies and countries like Japan for providing good financing for the Philippines.

He also said the government was able to generate P130 billion dividends from state-owned companies for this year, much higher from the P65 billion last year.

Due to pandemic, many businesses have temporarily or totally closed their operations and thousands of Filipino workers have lost their job in the country or abroad. Celerina Monte/DMS