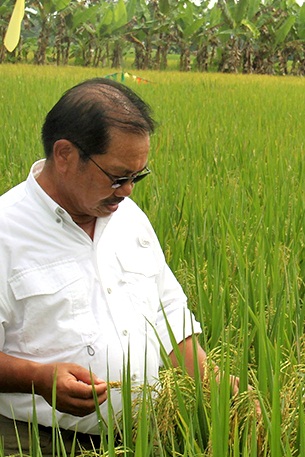 A planned importation of additional 250,000-metric tons of rice for the country's buffer stocks may have to be reviewed and validated as the Department of Agriculture expects a bumper rice harvest this planting season, Agriculture Secretary Emmanuel Piñol said. “So far, there has been no reported infestation,” Piñol said in a statement Tuesday, “and this season's crops have not been affected by inclement weather.” He said he would ask different DA regional offices to validate his “observations and assumption that with the growth of rice in almost all rice farming areas of the country this season, the country could enjoy a bumper harvest.” In recent weeks Pinol traveled to Panay Island, Bicol Region and most recently Oriental Mindoro and saw each time “vast fields of palay nearing harvest.” “Should this observation and assumption be validated, I will advise the National Food Authority Council to put on hold the planned importation by the private sector of an additional 250,000 metric tons of rice from Vietnam,” he said. Allowing private traders to bring in imported rice at this time, Pinol said, “would result in a drop in the buying price of palay produced by Filipino farmers.” He said he would suggest “NFA should just allocate more funds for the procurement of the farmers' produce this season” instead of importing rice to beef up the country’s buffer stocks.” The local farmers' produce, he said, could “fill up requirements to establish a sufficient requirements to establish a sufficient buffer stock for the rest of the year.” DMS