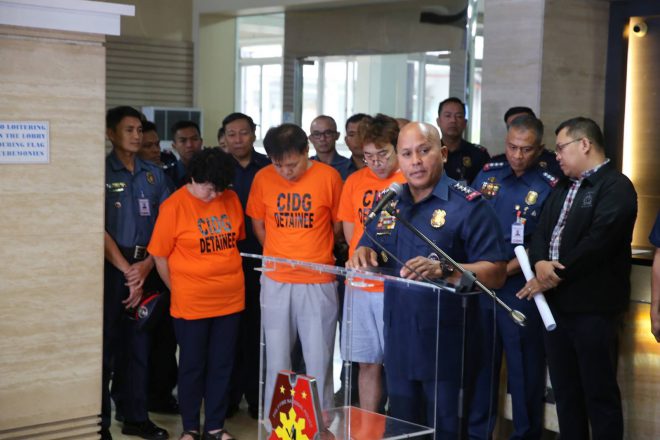 Philippine National Police (PNP) Director General Ronald Dela Rosa presented the three Koreans arrested by the Criminal Investigation and Detection Group (CIDG) in separate operations in previous month. Presented were Yong Ho Jeon, 32, who arrested in his residence in Milano Residences located at Century City, Makati City around 10:05 pm last March 25. Two other Koreans presented by Dela Rosa were a couple identified as Yam Sum and Yang Muyung Ock Yeo. The two were arrested in a law enforcement operation in La Trinidad, Benguet last March 29. Yam Sum was arrested due to warrant of arrest for three counts of fraud while Ock Yeo was captured due to violation of immigration rules and regulation. In a report, Superintendent Roque Merdegia, head of the Anti-Transnational Crime Unit of the Criminal Investigation and Detection Group, said Jeon is wanted in South Korea for swindling his compatriots for a total amount of six billion Korean won. “Jeon is part of a group of South Korean nationals who established a call center in Korea sometime in 2015. Their group, targeted Korean individuals and company who are planning to borrow large sum of money from banks and other financial institutions,” he said. “The group calls their target and pretended as staff or connected with financial institutions and asked for money allegedly to be used in the facilitation of the loans. The group were able to establish of data base of the profile of their victims. Then, extortion activities by the group started,” he added. Merdegia said the group collected around six billion Korean won from their victims from 2015 to 2016. The victims filed cases against the group before Korean Court. Jeon fled to Manila in 2015, with his 3 more or less, cohorts,” he said. Merdegia said the group initially stayed in “Malate where they again established telephone fraud and extortion and protection racket activities.” “Jeon and his group is believed to have joined with other Korean groups in the country which are engaged in extortion, kidnapping, contract killing, protection racket and other criminal activities,” he said. (Robina Asido/DMS)