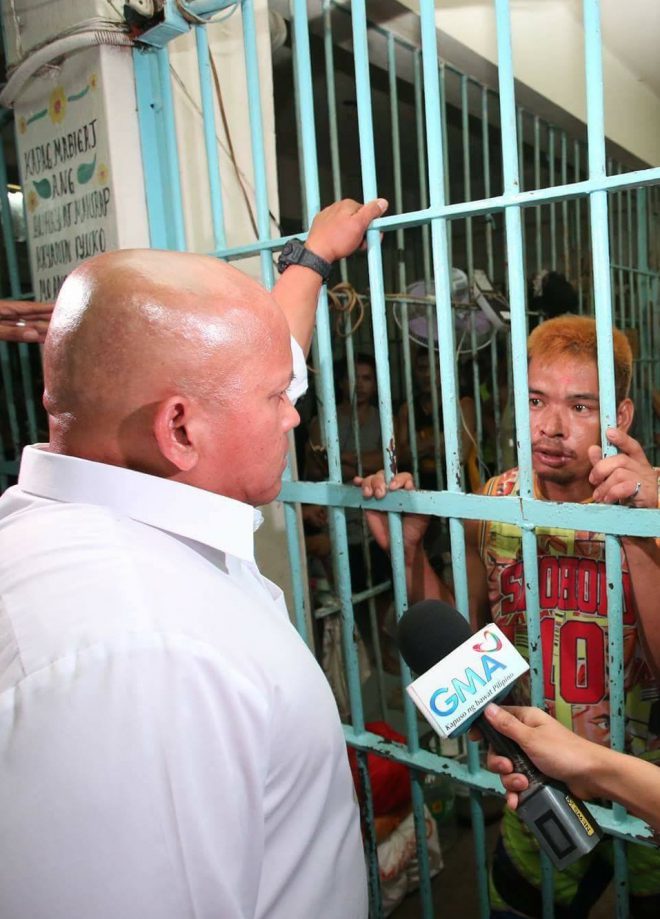 Philippine National Police Director General Ronald Dela Rosa said he defended the cops involved in an alleged secret jail from extortion charges by detainees even as they are being investigated by the Internal Affairs Service. Dela Rosa said the administrative relief of the chief and 12 others of the Manila Police District Station 1 in Tondo was made to pursue an impartial investigation. "That's why they were relieved​.​ I instructed the IAS to investigate, to prove that their violation is against the law. Then they have to face the consequences of their action​,​"​ ​Dela Rosa ​said late Monday. He said he defended them against the claim of the Commission on Human Rights (CHR) policemen from MPD Station-1 allegedly ​extorted money and tortured detainees inside the​ jail which was located behind a cabinet. "​Let’s make this clear. The defense I made is the issue being showed by CHR they are asking for 40,000 to 50,000 ( pesos) to settle the case so the detainee will be released. I proved there that there is none. I asked there (the detainees), those ten, none. The torture, there is none," he explained. Dela Rosa admitted ‘secret cells’ inside any police station is against the law. ​"​Legally, ​that is wrong because that is not where they should be detained. ​That’s against the law. ​But I asked them (police officer) what they said is they​ are just maximizing space​. There is an alley there that can be use to lessen space​..Then ​policemen are still human​, ​they are thinking that it should not be crowded there," he said. ​Dela Rosa he is against rogue cops and he will let officers from MPD Station to explain to the court  why there is a cell inside their station. ​"​It is clear that it is not the right jail. They should answer in the court… if they say it is to make the cell spacious, then that's the least of my concern. What my (concern) is extortion and abuses, that's what I hate," he said. Dela Rosa said those detainees denied the allegations and told him that they are grateful because they can stay comfortably in detention. "They are thankful that they were being fed by the policemen even if they don't have visitors. No one will bring food (for them). Policemen gave them food. Regarding the cell, the station commander should answer why they are detained there. But the prisoners, they said "we are thankful sir we are detained there, more spacious, we can lay and sit compared to the main detention cell that is crowded"," he said. Dela Rosa revealed the detainees​ are staying in the cell for not more than 36 hours and​ ​​told him that they lied to the CHR in hopes of being released. "O​ne said​: Sir, ​we said that​, ​we lied because we thought the CHR can freed us after the inspection. We said that because we thought they can help us get out of jail. How can they go out if they are facing charges? How can they go out?" he added.​ (Ella Dionisio/DMS)