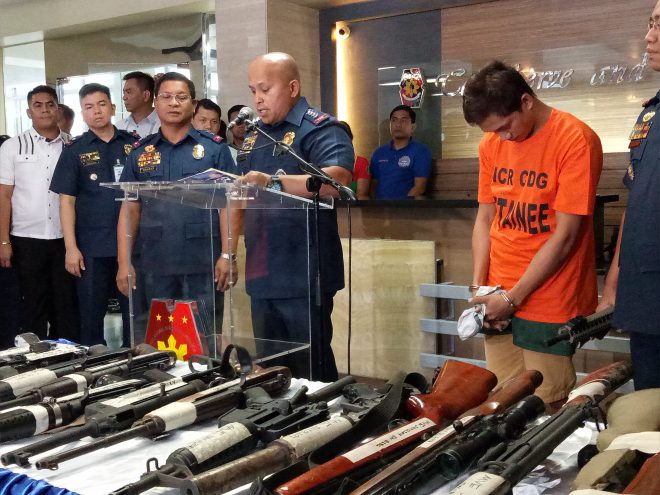 Philippine National Police Director General Ronald Dela Rosa presented on Tuesday some high powered firearms, gun parts and accessories confiscated  in a raid on July 1 from a gun running syndicate in Lipa City, Batangas believed to supply firearms to the Maute group. Dela Rosa said about 1,013 pieces of firearms, gun parts and accessories including Spikes HPFA 5.56 calibe used by the Maute group in Marawi were found in a raid in Purok 2, Brgy. Sampaguita in Lipa City. The Spikes HPFA 5.56 caliber is the basic assault riffle used by the Philippine fighting forces which cost around P250,000 each.  Dela Rosa described the firearm as "light, not so big, semi-compact and fashionable". Romel delos Santos, the leader of the syndicate with Angelo Lecaros, Ramil Lecaros, and Christian Lecaros were arrested, he said. Police Director Roel Obusan of the Criminal Investigation and Detection Group said,"I want to point out he has two jobs, refurbishing and assembling… So, the gist of the matter is manufacturing is the Spikes tactical firearm because this is registered abroad and they are imitating it.". Obusan said the group is "good in producing firearms and they has the talent to do and he has the skill to do it that is why if you see the finished product is truly just like the original". Dela Rosa said one of the suspects admitted some firearms recovered by the authorities from the Maute group  in Marawi came from the syndicate. "There is one of them who is painted out the guns. He admitted that these guns recovered in Marawi is from them, he painted it", he said. The leader of the group has been operating for 22 years and has sold  671 firearms as of December 2016, Dela Rosa said. Obusan said: "Initially we filed a case for illegal manufacturing…However, because of our record book, we have leads how many went to politicians,  police and military. We have  to identify those, where did it went and if we would connect it to rebellion as of now there is no evidence for that". If the guns brought by the politicians from the syndicate were recovered and used by the Maute group against the government forces, they will be charged with rebellion, Dela Rosa said. He said the arrest of the syndicate will affect the battle of the government against the Maute group in Marawi. "If the problem in Marawi will not be resolved yet in the future, their supply of firearms will decrease. If they mount another rebellion their source of firearms is  lessened", he said. (Alanna Ambi/DMS)