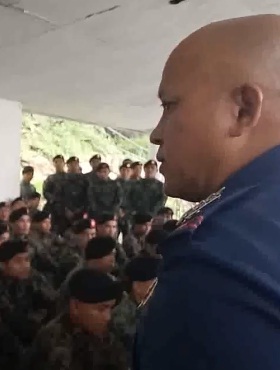 PNP to probe resurgence of drug trade in Bilibid, won’t spare SAF if they are involved

Philippine National Police (PNP) Director General Ronald Dela Rosa said Wednesday it  will investigate the resurgence of trade inside the New Bilibid prison which allegedly involved the Special Action Force. "I have to be objective enough...(PNP Director for Intelligence) General Gregorio Pimentel  is here to conduct a deeper counter-intel operation on you. I will not hide. I am not plastic. I ordered a counter-intel through Directorate for Intel to know if the accusation is really true", Dela Rosa told SAF members in New Bilibid Prison. Justice Secretary Vitaliano Aguirre II said on July 3 illegal drug trade has returned in the New Bilibid Prisons and SAF may have been involved. The  initial plan of PNP is to limit high profile drug personalities to Building 14 and maximum security in New Bililid Prisons but some drug lords, including Peter Co were moved to medium, Dela Rosa said. "Before the Bilibid drug lords were in Bldg 14 that was guarded by SAF. Now (they were) moved to maximum. The SAF guards Bldg 14…there are also drug lords moved to the medium…They do not control that. I just like you to know that we do not totally manage the Bilibid", he said. Dela Rosa said he trusts the SAF but they will face consequence if it is proved through the investigation they are involved in the resurgence of illegal drug trade in Bilibid. "I want to find out through the investigation that if they are really involved, they will pay and I will act on that. But as of now I must tell you with open heart that I don't doubt even a little bit the SAF ( who are) here", he said. (Alanna Ambi/DMS)