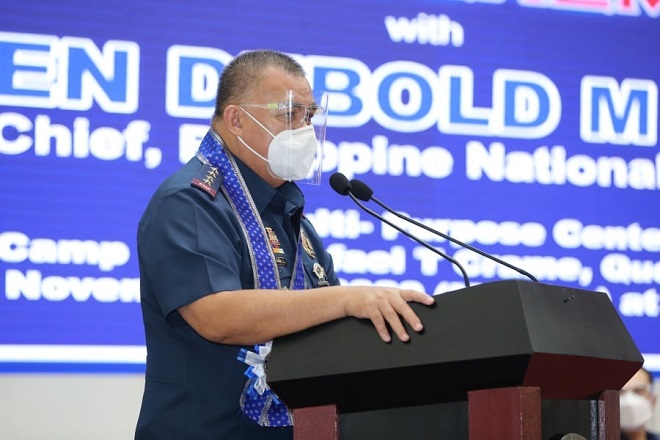 The chief of the Philippine National Police (PNP) on Wednesday said there might be more respondents in the case of Christine Dacera based on the CCTV footage they acquired from the hotel.

“Accordingly, we now understand that the people we are looking for might increase based on the CCTV footage we recovered in the hotel,” General Debold Sinas said in a press briefing after meeting the Dacera family.

Asked about the screenshots of conversations where Dacera was appeared tired, Sinas said he still believed that the victim was sexually harrassed.

"I think there is still a rape... The girl has bruises, lacerations, I believe on the investigators that this happened... We believe because of the bruises," he said.

Sinas reiterated his appeal to the family of the alleged suspects to surrender their children if they did not do anything.

“Our lines are open and some of them have already made initial contact and we are pursuing that just to shed light on the incident… All those seen in the room before the incident will be included in the case. Our lawyers and investigators are already coordinating on the cases that we will file against them,” Sinas said.

Sinas also said they  established the motive for the incident.

“Yes but we reserved that for the investigators… The progress of investigation is ongoing and I don’t want to get ahead of the case,” he said.

The PNP chief said an ultimatum was given since they identified the other suspects.

“My authority is already delegated to the director of CIDG (Criminal Investigation and Detection Group). CIDG will issue the subpoena of all the other suspects and I think the CIDG comes in in the investigation together with Makati police,” he said.

“After they did not appear we will be filing direct contempt so we will now do warrants and take them forcibly… We hope they will come peacefully so that they can give their side,” he said.

Sinas said almost all the respondents were caught in the CCTV footage.

On the autopsy result, Sinas said the cause of Dacera’s death, which is ruptured aortic aneurysm, has other factors which will just be explained by the medico legal officer in the court.

Sinas did not say if Dacera's autopsy circulating on social media is true.

The PNP chief assured the respondents of their safety.

“For assurance, if they know officials that will pick them up no problem with us… If they are afraid, we understand that’s why we ask them to surrender,” he said.

“To their family, rest assured nothing will happen to them,” he added.

Sinas appealed to the public to stop from speculating on the incident.

“I like to request an appeal to the public, please refrain from speculating in social media… We are investigating the case and we assured the family that the PNP will not let this case go,” he said. Ella Dionisio/DMS