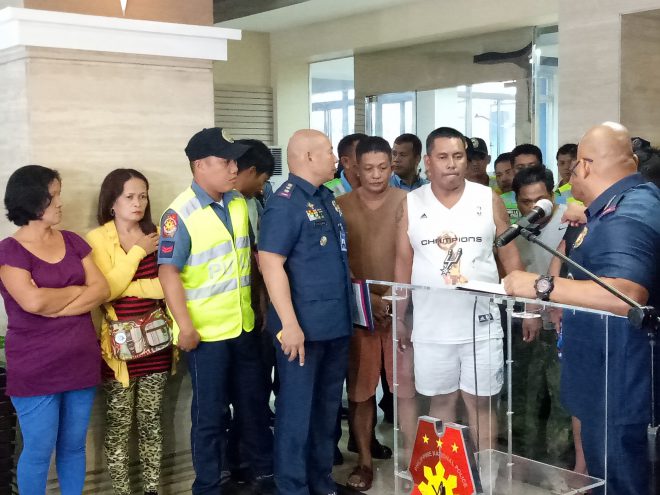 The head of a police precinct in Taguig and seven others were arrested in an entrapment operation on Saturday after a complaint reached the Philippine National Police that he and his men arrested a truck driver on allegations on drug test but was willing to release him if he gave money. Philippine National Police Director General Ronald Dela Rosa said on Monday Senior Inspector Cesar Espejo, the precinct commander, will be facing charges before the justice department. Reggie Adrales, Bobby Tejero, Rolly Barcelo, Antonio Bontia, and Antonio Bag-ao and Stephanie Villanueva, who are members of a barangay security force, were arrested after posing as police officers who were going to collect money from the driver’s live-in partner, he said. The live-in partner said the truck helper was arrested by the suspects for alleged drug case somewhere in Taguig City, Dela Rosa said. Dela Rosa said the suspects initially demanded P10,000 from the victim's partner and later lowered it to P6,000 in exchange for the release of the truck helper to be delivered to Sto. Nino Hospital in Taguig City. The PNP’s Counter-Intelligence Task Force conducted an operation in Bicutan, Taguig City on July 1 and the victim was rescued inside a multi-purpose center of Brgy. West Bicutan, Taguig City, he said. Dela Rosa said the marked money, one 38 revolver, one 45 pistol and one 9 mm pistol loaded with ammunition were recovered. The suspects are charged with kidnapping, usurpation of authority, violation ng 10591, violation 9165. They were to brought to the Department of Justice on July 2 for inquest proceedings, he said. Dela Rosa said another suspect  named Edwin Del Valle was arrested in a hot pursuit led by Superintendent Alex Santos. (Alanna Ambi/DMS)