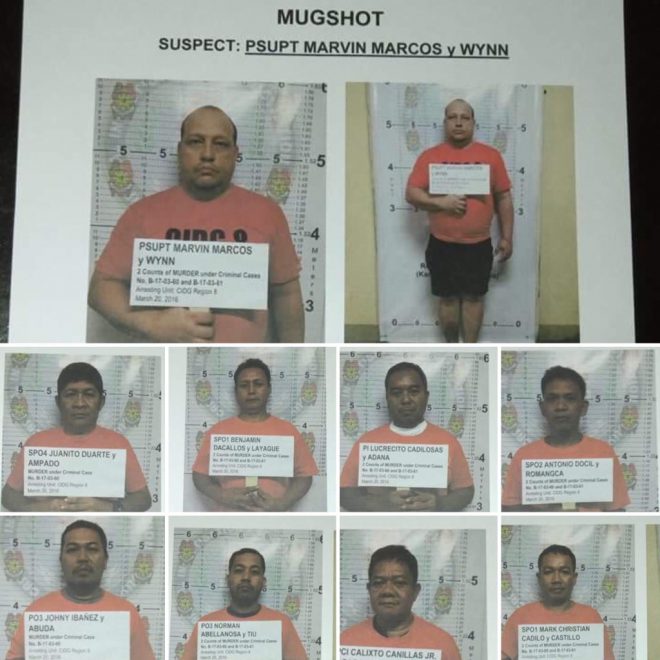 Policemen involved in the shooting of Albuera Mayor Rolando Espinosa Sr. and another inmate were accounted for after warrants of their arrest were released last week. This was revealed by Philippine National Police (PNP) Director General Ronald Dela Rosa in a press conference in Camp Crame. “As of now, their warrant of arrest for murder are served now at the Criminal Investigation and Detection Group (CIDG) Region 8,” he said. Dela Rosa said the Regional Trial Court in Leyte issued warrant of arrest for all 19 suspects, including Supt. Marvin Marcos, the regional director of the criminal investigation and detection group. “All of them are already accounted there in CIDG in Region 8 and their warrant will be return to the court and they are just awaiting court orders on where they will be remanded,” he said. Marcos and his men were serving a search warrant in the cell of Espinosa on November 5 when shots rang out. The body of Espinosa and another inmate was found. In a statement, Senior Superintendent Dionardo Carlos, PNP spokesman, said the regional CIDG office was completing booking procedure for 19 policemen. “According to Police Chief Superintendent Elmer Beltejar, regional director, the respondents are now undergoing booking procedure at the CIDG Regional Unit after they voluntarily submitted themselves for accounting and investigation,” he said. “Upon completion of the booking procedure, which include fingerprinting, documentation, mugshot and medical examination, the warrants of arrest will be returned to the RTC Branch 14, and a corresponding commitment order is expected to be issued by the Court for the custody of the respondents,” he added. Carlos said Carlos Arguelles, presiding judge of RTC Branch 14 of Baybay City, Leyte issued two warrants of arrest for murder against the suspects last March 16, 2017. Other policemen who are subject of the warrant of arrest were identified as PSupt Santi Noel Matira, PCInsp Leo Laraga, SPO4 Melvin Cayobit, PO3 Johnny Ibañez, PCInsp Calixto Canillas Jr., SPO4 Juanito Duarte, PO1 Lloyd Ortigueza, PSInsp Fritz Blanco, PO1 Bhernard Orpilla, PSInsp Deogacias Diaz III, SPO2 Benjamin Dacallos, PO3 Norman Abellanosa, PO1 Jerlan Cabiyaan, PInsp Lucrecito Candilosas, SPO2 Antonio Docil, SPO1 Mark Christian Cadilo, PO2 Jhon Ruel Doculan, and PO2 Jaime  Bacsal. DMS