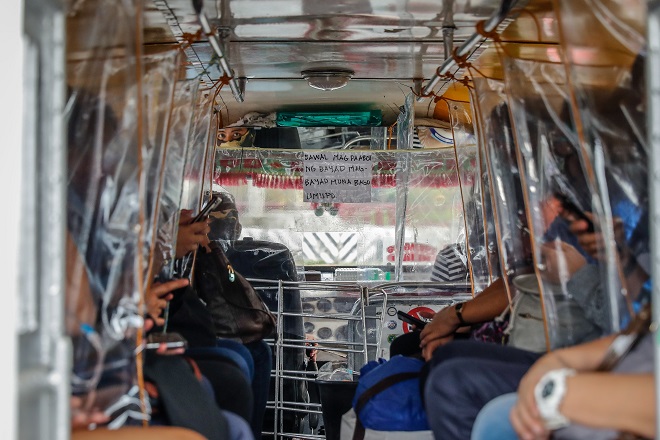 The reduced physical distancing inside public transport will continue until President Rodrigo Duterte revokes the policy, Malacanang said on Wednesday.

Presidential Spokesperson Harry Roque said the Inter-Agency Task Force for the Management of Emerging Infectious Diseases discussed again for six hours the relaxation of physical distancing in public transport during its meeting on Tuesday.

He said this was not the first time that the IATF discussed the matter and yet it still took its members six hours dealing with it.

"The body came up with a recommendation to be submitted to the President and it would be the President who will ultimately decide," Roque told CNN Philippines in an interview.

He cited the "serious differences" of some departments that led to IATF's discussion on the matter again.

Concerns about the implementation of a reduced physical distancing came out after the Department of Transportation started enforcing it last Monday.

A medical group expressed concern that cases of coronavirus could increase due to relaxed measure on physical distancing. However, there were also medical doctors who mentioned that what is more important is the wearing of mask and face shield and the observance of other health protocols apart from social distancing.

Roque recalled that when the issue was first discussed in an IATF meeting last week, no Cabinet members opposed it.

Asked if the reduced physical distancing will continue, he said, "I think so, because it was previously approved in the last IATF meeting last Thursday. So, until the President revokes it, I think it will be implemented."

Duterte may come out with his decision not later than Thursday, September 17, Roque said.

Some Cabinet officials who have been supporting the reduced physical distancing inside public transport said that this would help the economy as people could go to work without worrying how they could reach their job sites. Celerina Monte/DMS