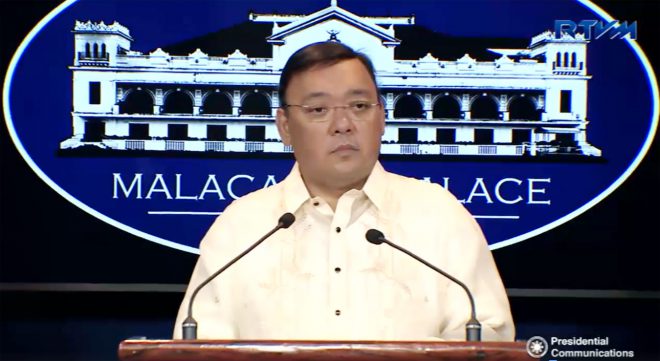 Presidential Spokesperson Harry Roque apparently became irked in a television interview when he was asked if he would denounce the letter of Defense Secretary Delfin Lorenzana to the University of the Philippines terminating a 30-year-old agreement that prohibits police and military personnel to enter the university campuses without prior notice.

"The Source" television host Pinky Webb of CNN Philippines raised the question in reference to the challenge made by UP journalism professor Danilo Arao on his Twitter account, stating, "UP faculty and alumni who are Duterte's top level officials should denounce Lorenzana's letter terminating the 1989 accord. This disregards everything UP stands for. Should they remain silent? A six-word question: Where is your honor and excellence?"

Roque was a UP graduate and he even taught at the UP College of Law before entering politics.

Speaking not as a presidential spokesperson, Webb asked Roque if he was denouncing the letter, which the latter replied, "There's really no such thing when you are a presidential spokesperson. All I'm saying is, let's talk about this; I support the steps of the UP President, and let's see why a 30-year-old accord should not be continued when it has worked, apparently perfect, well in the past 30 years."

He added that he was not duty bound to follow anything that Arao says.

"I have to highlight the fact that I think the question of Arao was unfair. In the first place, why am I duty-bound to follow anything that Professor Arao says? He made appear as if it’s compulsory for me to follow him. I spent more time in UP than him. And I think, as I said, I even have…I’m even more senior academic than him. So it was not a fair question. I’m not duty-bound to follow anything that Danny Arao says," he said.

When Webb clarified that she was not saying that Roque was duty-bound to follow Arao, the spokesman retorted, "Yes, but you were wrong. You were implying as if I had to follow what Danny Arao has said. What is the basis for that? There’s no place for that."

Webb explained that she was just reading a tweet.

But Roque said, "Yes, but you said, I had to follow him and if I did not do as he did, then I have no honor or excellence. Is that a fair question? That’s not."

"It’s as if, if I don’t agree with Arao that I have no sense of excellence or honor."

Apparently to pacify Roque, Webb asked him how he would like to end the issue.

Roque said, "I already said it. I have never experienced being in UP with soldiers or military and I’d like to facilitate the discussion between the UP President and the Secretary of National Defense. I’m offering my good offices for them to have this conversation."

Lorenzana has decided to terminate the three-decade old agreement with UP, claiming that the accord had impeded the government's counterinsurgency operations against the communist rebels. Celerina Monte/DMS