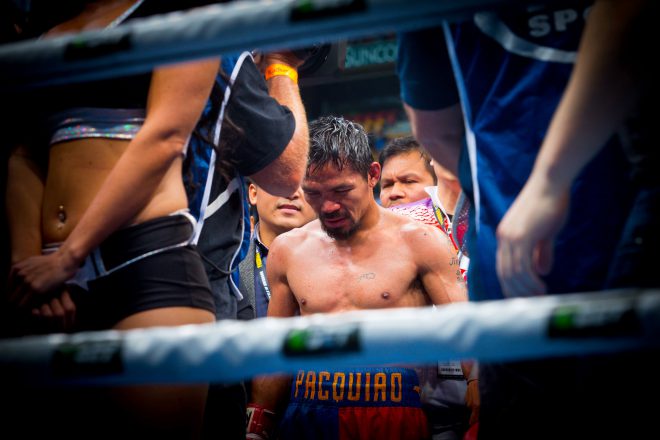 Senate President Aquilino Pimentel III said he will let Senator Manny Pacquiao decide on his boxing career after he lost his World Boxing Organization welterweight title to Australian underdog Jeff Horn on Sunday. "Let's not interfere on boxing career decision of Sen. Manny (Pacquiao). He is the only one who knows his body hence we let him decide," Sen. Koko Pimentel said in a statement on Monday. He said Pacquiao, whom sportscasters call  the fighting senator, will be his hero forever. "Senator Manny Pacquiao, my PDP- Laban partymate and colleague in the Senate is forever my hero and idol. When he was at the peak of his boxing career and global popularity, he allowed me to be his friend," Pimentel added. Pacquiao was elected to the Philippine Senate in 2016. Other members of the Senate lauded Pacquiao’s gallant stand. "Manny fought well. Referee and judges did not deduct the headbutts he sustained. Punches while headlocks were counted for (Jeff) Horn. It's called hometown decision," said Senator Vicente Sotto III said. Senator Sonny Angara said whether Pacquiao won or lost, Filipinos will always be proud of him and what he have done for sport and the whole country. "In victory and in defeat, we have celebrated and cried with you. We are proud of you Sen. Pacquiao!" Angara added. Senator Nancy Binay said Pacquiao showed that he can still fight alongside with young boxers. "Manny showed us that we remain graceful in defeat, never losing hope, and striving to get back up on our feet against adversity," Binay said. Senator Cynthia Villar thanked Pacquiao for his valiant fight. "Despite his loss, the fact remains that Pacquiao's feat as the greatest boxer of our time will be very hard to replicate. In the heart of many Filipinos, Pacquiao is a true champion who has given so much honor and pride to Filipinos around the world," she said. Senator Joel Villanueva said Pacquiao exemplified strength and courage throughout the battle making him one of the greatest fighters of this generation. "We join the entire nation in congratulating Sen. Manny Pacquiao for fighting a good fight. We are still and will always be proud of you for bringing so much pride and honor to all Filipinos around the world. You have exemplified strength and courage throughout the battle, truly one of the greatest fighters of this generation. You will always be our People's Champ! Mabuhay ang ating Pambansang Kamao!" he said in a statement. (Ella Dionisio/DMS)