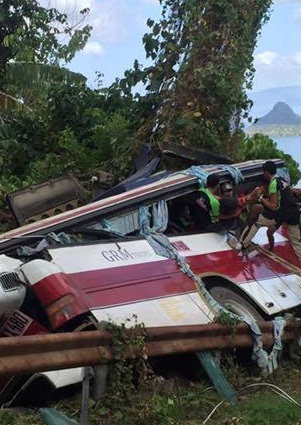 Seven killed in Batangas accident between car and truck

Seven people died while another is still in critical condition after a road accident in Batangas last Satuday night. In a report, the Sto. Tomas Municipal Police Station said the accident occurred along President Laurel Highway at the vicinity of Brgy. San Roque, Sto Tomas, Batangas around 9:50 pm. In telephone interview, Police Inspector Erickson Go, Sto Tomas police public information officer, said based on initial investigation the Toyota Corolla occupied the opposite lane and hit the truck. Go said the driver of the Toyota Corolla vehicle and his five passengers died on the spot. He said two other passengers were rushed to Cabrini Hospital for treatment but one died and the other one is still in critical condition. Go confirmed that the driver of the truck is under the custody of Sto Tomas municipal police station. He said the driver, identified as Rodolfo Mandac Jr., will face charge of  reckless imprudence resulting to multiple homicide and physical injuries and damage to property because of the incident. Robina Asido/DMS