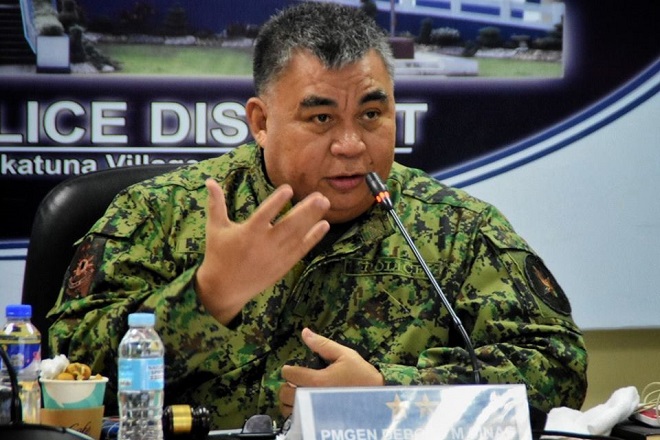 Sinas may be moved up, Danao eyed as NCRPO chief: Cascolan

National Capital Region Police Office ( NCRPO) chief Major General Debold Sinas deserves to be promoted despite being allegedly involved in controversies, according to the chief of the Philippine National Police (PNP) on Wednesday.

In a TV interview, Police General Camilo Cascolan said he will still evaluate the performance of Sinas when he was asked if the NCRPO chief will be included in the  reshuffle that he will implement in the coming days.

“Well until now there is no replacement. We have to evaluate him properly. Of course, the guy deserves also an evaluation and of course a promotion too,” Cascolan said.

“He has done good things and that's all I can really say. I think he needs to be up to the directorial staff or in a certain position that is fit most especially for it,” he added.

Cascolan said Sinas is fit to be in the directorial staff as he is an expert with regards to training personnel and recruits despite controversies surrounding him, including his birthday celebration last May.

Cascolan said he is eyeing Calabarzon police chief Brig. General Vicente Danao to be the next top cop of Metro Manila police.

"He's doing good. He did his best and he has done good in PRO IV-A... He has a reputation in the service. He is a very competent person too," Cascolan said.

"Whether CIDG ( Criminal Investigation and Detection Group) or NCRPO, it's good. But I would rather choose him for NCRPO because he is much better really in NCRPO,” he added.

With his two-month stint as PNP chief, Cascolan said he is planning to recommend the promotion of at least five senior officials to the rank of three-star generals.

"Well, there may be immediately an addition of five three-star generals… This is of course with the approval of Napolcom (National Police Commission) through the SILG (Interior Secretary Eduardo Año)," he said.

Since he was appointed as the new PNP chief, Cascolan reshuffled more than 11 police officers to different key positions.

In the same interview, Cascolan denied that "men of former PNP chiefs" have been the targets of the reshuffle .

"Actually, I had a lot of people under General (Oscar) Albayalde and General (Archie Francisco) Gamboa and I will tell you, they are at the right position right now. I promoted them, even the chief of staff... Ask the people around you," he said.

Cascolan revealed that Central Visayas police chief Police Brig. General Albert Ignatius Ferro was demoralized when he asked for a new position and appointment of former PNP Health Service director Herminio Tadeo Jr to Finance Service was cancelled as it was a “midnight appointment”.

"It's really very hard to reshuffle, most especially if you're looking for people for the right position," Cascolan said. Ella Dionisio/DMS