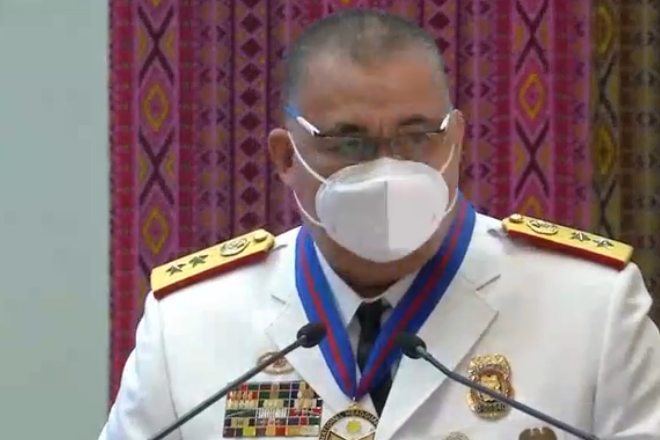 The chief of the Philippine National Police (PNP) on Wednesday said the Department of Interior and Local Government (DILG) has also an agreement with the University of the Philippines (UP) regarding the entry of police in various UP campuses.

In a chance interview in Pasay City, General Debold Sinas said they support the decision of the Department of National Defense (DND) terminating their 1989 agreement with the university but he clarified they cannot just follow suit.

“We had a meeting with the senior officers of the DILG and we have already reported to them that the DILG, PNP have a similar agreement during the time of Secretary (Rafael) Alunan (III),” Sinas said.

Sinas said it's up to Interior and Local Government Secretary Edgardo Ano whether he also wants to terminate the agreement.

“So we are looking at the actions of the SILG (Eduardo Ano) on what should we do but we will be following up the lead of DILG… However we supported the move of the SND (Delfin Lorenzana),” he added.

According to the UP Gazette, the state university has two agreements with national agencies regarding the entry of military and police forces into various campuses.

It said both agreements define the relationships of UP and the DND as well as police offices vis-à-vis the entry of soldiers and policemen in the university.

Sinas said since law enforcers were barred from entering the university, incidents were not properly investigated and their activities were not being monitored but now that they can have easy access, he said there might be possible change

However, Sinas assured the students and faculty members that they will not intervene in school management.

“We will not intervene whoever is their students, instructors. What we do is for the maintenance of the prevailing peace and order of the campus,” he said. Ella Dionisio/DMS