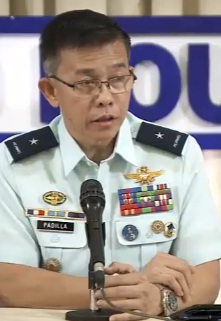 About 200 to 300 civilians remained trapped in Marawi City and need to be rescued, a military spokesman said on Friday. "Based on the last estimate, around 200 to 300 residents could have remained inside the conflict areas," said Armed Forces of the Philippines spokesman Brig. Gen. Restituto Padilla Jr. in the "Mindanao Hour" press briefing. He said less than 1,000 buildings have been occupied by the Islamic State-inspired Maute Terror Group whose number dwindled to around 80. He expressed belief the fighting could no longer be prolonged, citing that in some areas, they were not retaliating. At the same time, Padilla said the number of propaganda websites of the terrorist group has increased to 300 and of these websites, about 64 have been taken down. "And they are about 300 that are still being monitored as of now because previously we were monitoring only about less than a hundred. It grew to about a hundred twenty plus and now it’s about 300 that we’re monitoring. So of the accounts that we are monitoring, about almost 60 or 64 of that have been taken down. And this was with the cooperation of the social media companies and we’re doing it continuously," he said. He also said the military has been coordinating with the Philippine National Police Cybercrime group. (Celerina Monte/DMS)