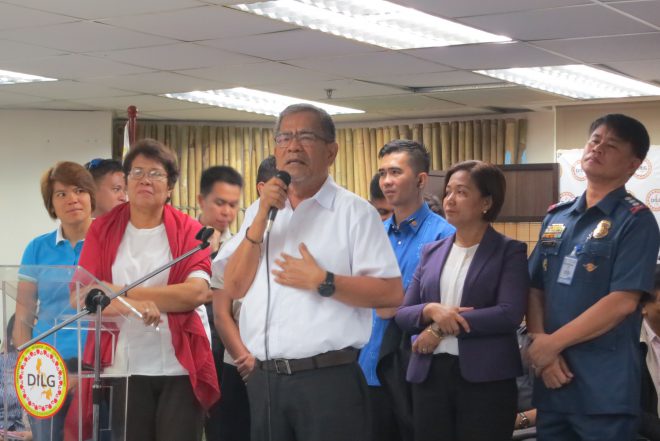 Sueno still supports Duterte despite being axed as DILG secretary

Ismael Sueno said he still supports President Rodrigo Duterte after he was sacked as the secretary of the Department of Interior Local Government (DILG). “Despite it all, I would like to say that I am not taking these against the President. I was in that post upon his desecration. Like I have always said, I serve at his pleasure. He has the prerogative to remove me from officer and I yield to the president’s decision,” Sueno said. “My DILG family, I would like to continue this appeal that I have given you since my day one as your secretary, let us support the president in his efforts to stamp out corruption, illegal drugs and criminality. Despite what happened, I still believe that the president has got what it takes to bring about the change that we desire,” he added. Sueno said he is not cutting his ties with the president. “I’m still supporting him because I saw his determination to eliminate corruption in government and drugs in the country,” he said. Sueno expressed his belief his dismissal as DILG secretary is part of the government’s camping against corruption. “This is part of the president’s drive in eliminating corruption in government, it’s just that I became a sacrificial lamb,” he said. “I just want the Filipino people to understand the nature of this alleged corruption or indiscretion on my part: I would have none of these. I do not intend to stay in this post even if I were able to prove my detractors and accusers wrong,” he added. Sueno said the president may be misinformed about the allegations against him. “I think that he was misinformed, I think so, he acted and decided on what he have read in the white paper,” he said. During his press briefing, Sueno answered all allegations against him, specifically the issue on his order for payment of fire trucks for the Bureau of Fire Protection which was the main reason he was dismissed. This allegation noted Sueno ordered the payment for the fire trucks despite the DILG legal department’s contrary opinion. He mentioned that the president fired him after knowing that he is not aware of the DILG legal opinion which in the hands of the president. “The alleged DILG legal’s contrary opinion was kept in secret by Usec. Jesus Hinlo by himself, glaringly or based on the very document itself. It was Hinlo who requested said legal opinion,” Sueno said. “When he received that legal opinion on Oct. 26, he did not give me a copy, nor inform me about it, I never knew of its very existence until the president confronted him about it,” he added. Sueno admitted that he felt he was not given due process as the president did not give him a chance to explain. “Well whatever happened, I accept it. I am also thankful for it although it hurts me I cannot do anything about it but it serves it purpose, like what I said earlier the government’s drive against corruption, I felt that there was no due process because he did not listen to me but after we cannot do anything so I just accept it,” he said Sueno said he sent a copy of his answer to the allegations against him to the Office of the President. I have already sent a copies of this to Malacanang, so it’s all depends to him (to see it or not),” he said. He expressed gratitude to the president from dismissing him as he admitted he can no longer shoulder the responsibility of being DILG secretary. “Thank you Mr. President, thank you also for dismissing me because I can no longer endure the life here, I am just a simple person from Mindanao, a farmer…, somebody else knows how to leave with this, while I will just go back to our farm,” he added. Sueno also welcomes possible filing of cases and investigation on the allegation against him which will give him a chance to clear his name. (Robina Asido/DMS)