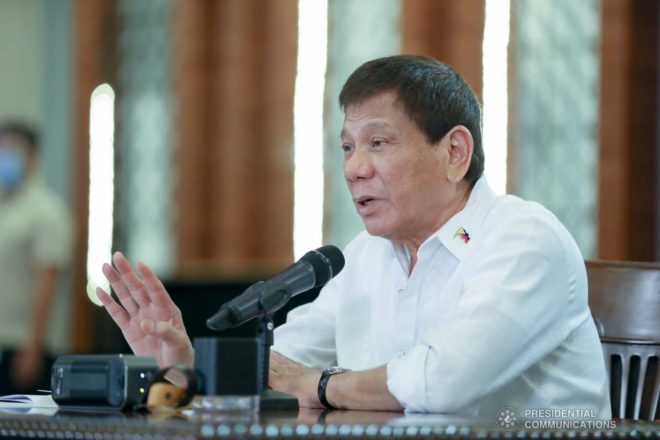 President Rodrigo Duterte has slammed those who claimed that they were able to prevent corruption in the government's plan to purchase vaccines against coronavirus disease, saying they were just muddling the issue.

In his weekly televised address to the people on Monday night, Duterte reiterated that there was no corruption in the immunization program of the government.

"I take exception to the statement that they were able to prevent corruption or an overprice becuse of their vigilance. No. Far from it actually. You were just muddling up - it's a muddle - they just want to muddle (the issue)," he said.

Some senators claimed that because of the Senate investigation, which it recently conducted on the government's vaccination program, they were able to stop the supposed overpricing of COVID-19 vaccines, particularly from China's Sinovac.

During the previous hearings, it was presented that the two doses of Sinovac vaccine would cost over P3,000 when in Indonesia, which is using similar vaccine, the price was much cheaper.

Government officials later said they did not know where the prices came from and said that Sinovac vaccine would cost less than P700 per dose.

Some questioned the credibility of Vaccine Czar Carlito Galvez Jr., who has been tasked to negotiate for the vaccines.

But Duterte vouched for Galvez's integrity as he supported the latter that they could not make public yet the prices of the vaccines since they were covered by the non-disclosure agreement with the manufacturers.

Duterte said whatever payment the government would make, it would pass through Finance Secretary Carlos Dominguez III. Large part of the government's fund for the vaccination program would come from the multilateral lending agencies, such as World Bank and Asian Development Bank. The DOF was tasked to negotiate for the loans.

The President also said that if he would engage in corruption, he would not do it when he is already on his fifth year as president.

Duterte said he could have started when he was still a mayor of Davao City for 23 years.

"I could already have lots of money when I ran for (presidential) election," he said. Celerina Monte/DMS