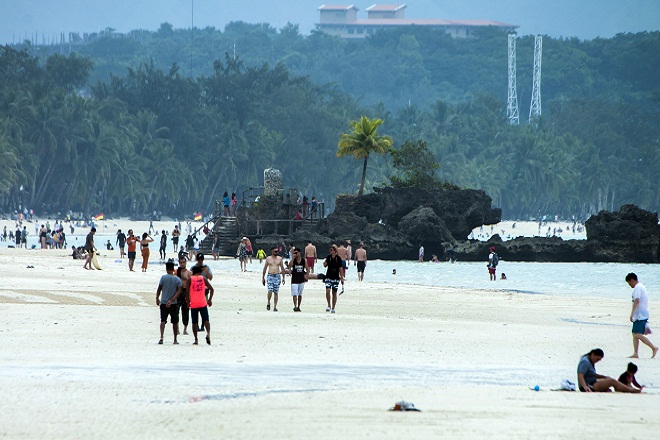 This was after the Inter-Agency Task Force for the Management of Emerging Infectious Diseases approved in a meeting last Thursday the adjustment from previous 48 hours.

"The IATF revised the 48-hour-prior-to-the-date-of-arrival negative RT-PCR requirement to those traveling to Boracay Island contained in IATF Resolution No. 74.   The Test-Before-Travel requirement now stands not earlier than 72 hours prior to the date of travel," said Presidential Spokesperson Harry Roque in a statement.

The IATF previously allowed local tourists from areas under general community quarantine to go to Boracay starting October 1, but subject to certain requirements such as the RT-PCR test negative result for COVID-19 within 48 hours.

But the local government and establishment owners have raised concern over the requirement on RT-PCR testing. They hoped that the government would instead allow the use of rapid antigen testing, which could produce faster results.

However, Roque, who is also the spokesperson of the IATF, has said that the use of antigen tests in Boracay would depend on the result of the pilot test in Baguio City, which also relaxed its restrictions to some tourists.

Roque said the IATF has also given the Department of Tourism the authority to determine the allowable operational capacity for accommodation establishments as well as the ancillary establishments within the mall premises.

"They may be allowed to leave the country subject to the submission of confirmed roundtrip tickets and adequate travel and health insurance for those traveling in tourist visas, execution of an immigration declaration acknowledging the risks involved in traveling and a negative Antigen result taken within 24 hours before departure, subject to the Department of Health (DOH) guidelines," he said.

Outbound Filipino travelers shall also follow the Guidelines of the National Task Force for returning overseas Filipinos, he added.

The IATF also approved, subject to conditions, the holding of beach volleyball tournament by the Philippine Super Liga under a “sports bubble concept,” operation of off-track horse race betting stations under general community quarantine or lower, and operation of licensed cockpits and the conduct of cockfighting activities in areas under modified GCQ or lower, Roque said.

On the operation of licensed cockpits and the conduct of cockfighting activities, the IATF said they would be allowed in areas placed under MGCQ or lower, subject to strict observance with the health and safety protocols and implementing guidelines as may be issued by the Department of Interior and Local Government.

However, in-person audience, online or remote betting, and the live broadcasting/telecasting of cockfights shall not be permitted.

The local government units shall have the final decision on whether such operation of licensed cockpits and the conduct of cockfighting activities can proceed in their respective localities. Celerina Monte/DMS