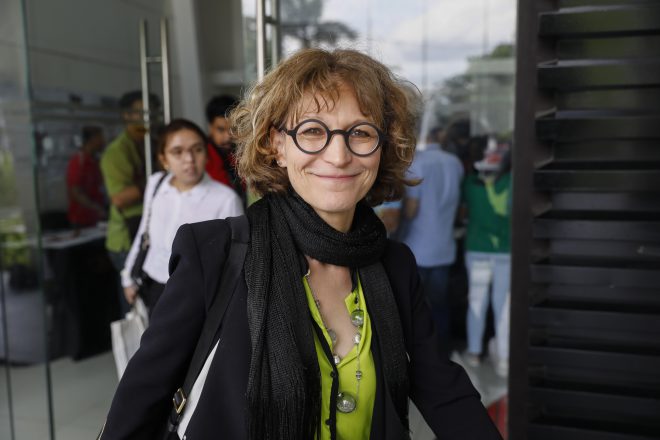 UN rapporteur Callamard in country, but only to deliver a speech

UN special rapporteur Agnes Callamard is in the country to speak at human rights forum, a spokesperson of the Commission on Human Rights said Thursday. Jacqueline de Guia told Daily Manila Shimbun Callamard attended the commission’s 30 th anniversary gathering late Thursday but did not speak. Callamard is scheduled to deliver a speech at a forum organized by the commission and the Free Legal Assistance Group (Flag) at the UP Asian Center Friday. The UN rapporteur will not undertake any investigation of the country's human rights situation, said Arno Sanidad of Flag in a separate text message to Daily Manila Shimbun. President Rodrigo Duterte had said he would welcome a fact-finding investigation by Callamard but he demanded she must take an oath before answering questions from government officials. Callamard refused. At a convention of orthopedic surgeons in Davao, Duterte reiterated the order he gave to mayors and governors in the campaign on illegal drugs. Duterte is facing a complaint at the International Criminal Court over the alleged deaths of thousands of Filipinos in his anti-drug war. “And here’s the shocker: I will kill you. I will really kill you. And that’s why the rapporteur of the UN is here, investigating extrajudicial killing,” Duterte said. Duterte  recalled telling mayors and governors in separate closed door meetings in Malacanang late last year he will kill them if they would go into drugs or would fail to stop these activities. “Once you enter into this, l ambush you, poison you, bomb you, whatever. Steal your wife from you,” Duterte said. “If you want to remain in your (posts) between now until election time --- do not do it,” he said. DMS