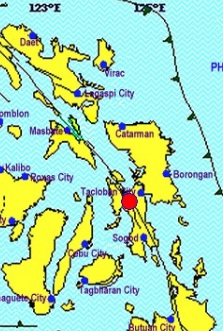 Two people were reported dead after a 6.5 magnitude earthquake jolted Leyte province Thursday afternoon. Kananga Mayor Rowena Codilla, in a radio interview, said 42-year old male died inside the two- storey Queda building after it collapsed. She did not give the name of the fatality. The Philippine National Police National Operations Center said there are “three trapped persons” inside Queda building. Codilla said at least 20 persons were injured when the building collapsed. "There are a lot of people still trapped inside," she said. Codilla said rescue is being done but they are waiting for the help from the provincial government. The Civil Aviation Authority of the Philippines (CAAP) it is temporarily suspending operations at the Ormoc airport after “runaway surface damage” was reported to the quake. CAAP Director General Jim Sydiongco they will wait for reports from the authority’s engineers who are arriving in Ormoc tomorrow morning. Ormoc City Mayor Richard Gomez in a TV interview, said a woman died due to landslide in one of their barangays. He said there are around 40 residents being treated for minor injuries and trauma. Gomez added that three of their highways sustained cracks but were still passable. Leyte Governor Dominic Petilla said the epicenter of the 6.5 quake was located in the mountainous area of Jaro. "But the geothermal power plant is there, so we have no power (electricity)," Petillla said in a radio interview. Philippine Institute of Volcanology and Seismology ( Phivolcs), in its bulletin, said the tremblor was felt 15 kilometers northeast of Ormoc City and eight km southwest of Jaro, Leyte at 4:03 pm. The quake has a depth of two kilometers. Its origin was tectonic, it added. (Ella Dionisio, Celerina Monte/DMS)