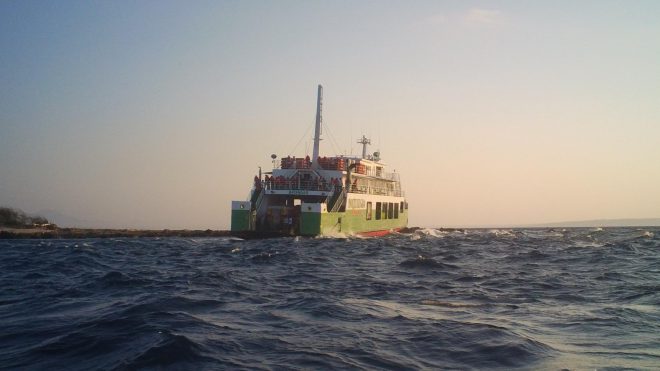 The Philippine Coast Guard (PCG), using its newly-acquired ship from Japan, rescued more than a hundred passengers of a roll on-roll-off vessel which caught fire from Calapan, to Batangas Thursday. PO1 Adel Canatuan of Philippine Coast Guard in Batangas said BRP Malabrigo (MRRV-4402) rescued a total of 104 passengers and 20 crew of M/V Divina Gracia which ran aground at the vicinity waters of Malajibomanoc Island at around 3 am Friday. The Coast Guard said the vessel, owned and operated by Montenegro Shipping Lines Inc, was on its way to Batangas port from Calapan when it was informed fire struck the M/V Reina Rosana at the vicinity of Matoco point in Batangas City around 2am. The M/V Divina Gracia was supposed to help the 25 crew and 88 passengers of M/V Reina Rosana but it accidentally grounded at the shallow waters of Malajibomanoc Island After being informed about the incident, Coast Guard District Southern Tagalog sent BRP Malabrigo, a multi-role response vessel to help the passengers and crew of MV Divina Gracia and the M/V Reina Rosana. "The MRRV-4402 launched its rubber boat to help three injured passengers of M/V Divina Gracia during the rescue operation around 5:45 am", the PCG said. Canatuan did not say the total number of injured passengers on both vessels but he confirmed they sustained slight injuries and were given first aid. He said BRP Malabrigo and other PCG boats helped the rescue operation to M/V Reina Rosana. (Robina Asido/DMS)