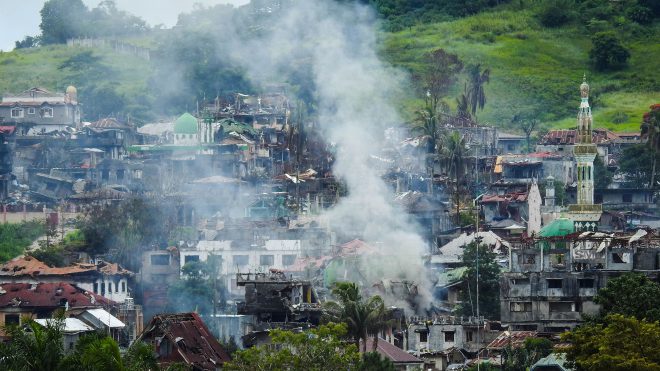 Government forces were able to clear nearly a hundred buildings in Marawi City over the weekend, a military spokesman said Monday. Lt. Col. Jo-ar Herrera, Army’s 1st Infantry Division spokesman, said the military cleared 40 homes and buildings last Saturday and 57 more Sunday. “Actually we are gaining more ground, as of yesterday (Sunday), this is one of the significant development yesterday, we were able to clear 57 buildings, these 57 buildings are previously held, previously acted as enemy battle positions,” Herrera said. “These are key terrains that we got. So it only means that the area that we cover is getting bigger every day. Last Saturday we were able to clear also 40 houses and buildings in the main battle area,” he added. Herrera emphasized how difficult it has been for the soldiers to clear enemy positions within the battle area, citing the presence of the improvised explosive devices (IEDs) and traps set up by the terrorists in their previously held areas. “The clearing operation is quite difficult because of the presence of IEDs, booby traps that were left by the terrorist in every building where they previously positioned,” Herrera said. “So this is a combination of a combat clearing operations, at the same time gaining more grounds and we are moving towards the center of the gravity of the enemy,” he added. Herrera said there is a leadership crisis that the military have monitored within the ranks of the terrorists. “For the past week we have monitored that they are really having a leadership crisis, divisiveness because of the issue of money, issue of gold that they got, because accordingly it was not shared,” he said. “We have report that there are terrorists who want to surrender but some were killed by their leaders,” he added. Herrera said the military are trying to validate the presence of Isnilon Hapilon in the battle area while he confirmed that Abdullah Maute. one of the Maute brothers, is still in the city. “We will continue our combat clearing operations. They have no way to run. They have lost ascendancy. They have lost their support. They have lost their connections, So what else will they do? It’s better for them to surrender, or die,” Herrera said. (Robina Asido/DMS)